After a year of Arab upheaval, Islamists are biggest winners 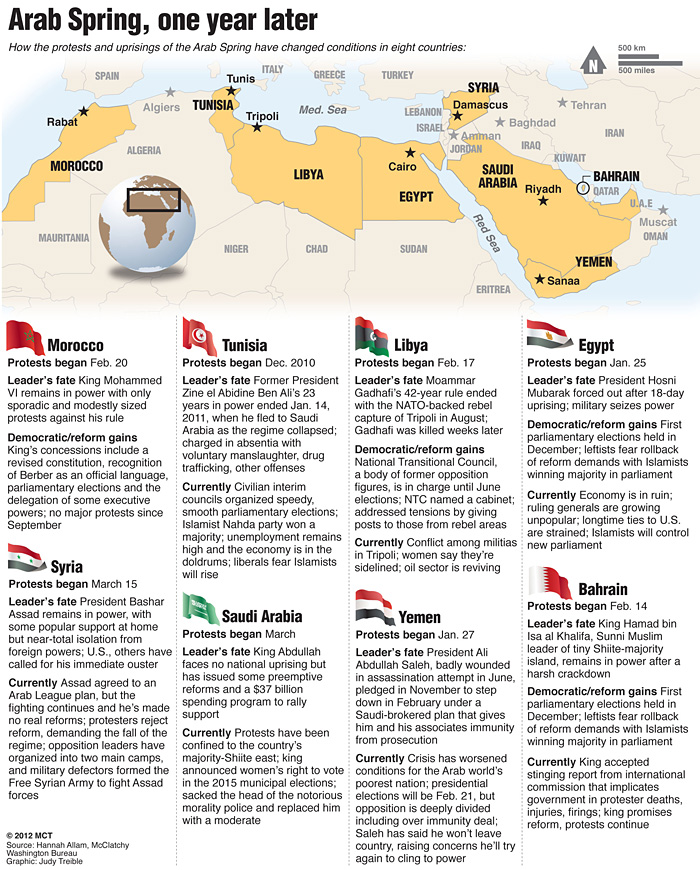 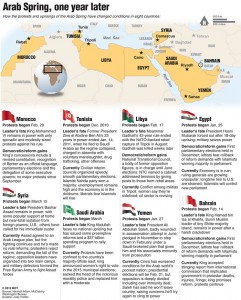 CAIRO — Almost a year ago, senior leaders of Egypt’s Muslim Brotherhood gathered in an apartment overlooking the massive protests in Cairo’s Tahrir Square. It was the 18th day of the uprising that would bring down President Hosni Mubarak.

The elder statesmen of the long-outlawed Islamist group scanned the crowds below, making sure that their young activists weren’t using religious chants or banners; they’d issued strict orders not to make the revolution seem Islamist in nature.

Satisfied, the leaders prayed together at sundown that Feb. 11, then they turned on the TV to see the vice president announcing that Mubarak had resigned after 30 years in power.

“That was the moment,” recalled Mahmoud Ghozlan, a member of the Muslim Brotherhood’s governing council, closing his eyes to savor the memory.

As ecstatic protesters celebrated below, the men in the apartment instantly realized that, with Mubarak gone, the Muslim Brotherhood’s decades of persecution were over, and the group finally had a clear path to political power. They sprang into action, using their long-standing service networks to protect neighborhoods, provide discounted food, form a political party and, ultimately, win nearly half the seats in a parliament that will convene Monday for the first time.

In the year since the wave of revolts that brought down three Middle Eastern rulers and left two others tottering began, the ascension of the Islamists has emerged as the dominant narrative.

The United States and other Western powers — along with Arab liberals and religious minorities — are watching with alarm as conservative Muslim politicians have filled the power vacuums left by the rebellions in Egypt, Tunisia and Libya. They fear that Taliban-style religious extremism will replace the old order’s secular autocracy; of particular concern are the future of Egypt’s peace treaty with Israel and the possible creation of havens for al Qaida-linked militants in Libya.

Supporters of the Islamists say the extremist threat is exaggerated and that no other political force is as trusted, disciplined or efficient to guide these scarred nations toward democracy. They note that across North Africa, Islamists are forging alliances with political rivals, meeting with Western envoys, courting foreign investors and spending millions of dollars on sophisticated electoral campaigns.

“At some point, something happens to blow the lid off tyranny, and that’s what we saw this past year with these revolutions,” said Ghozlan, the Muslim Brotherhood official. “Islamists are the new reality for this region, and the West must recognize that and engage in dialogue.”

Already, American diplomats in Cairo have reversed an old policy against direct talks with the Muslim Brotherhood and now meet with the group’s top leaders, a sign that Washington finally acknowledges the Islamist group’s influence in the Arab world’s most populous nation.

Tunisia’s Islamist Nahdah party easily swept that nation’s first post-revolution polls, and the Muslim Brotherhood branch in Libya is expected to be a formidable force in elections set for this summer. The interim governments of both countries have good relations with the U.S. and Europe — especially Libya, where Moammar Gadhafi was toppled mainly through NATO intervention.

Abdel Hakim Belhaj, the security chief in the Libyan capital of Tripoli, is a veteran jihadist whom the CIA captured in Asia and handed over to Libya for years of torture and imprisonment. He’s demanded a U.S. apology for his rendition, but he says he seeks no revenge and would support only “moderate” Islamism in Libya.

Yemeni Islamist groups are still key to protesters’ ongoing battle to unseat authoritarian President Ali Abdullah Saleh, and a Yemeni activist with an Islamist background was among the three women who received the Nobel Peace Prize for 2011.

While the extent of Islamist involvement in the Syrian revolt is unknown, the exiled leaders of the Syrian Muslim Brotherhood voice fervent support for the uprising via Al-Jazeera and other satellite channels. Syrian revolutionaries also have a celebrity Islamist supporter in the Qatar-based television cleric Sheikh Yusuf Qaradawi, who’s often described as a spiritual guide for Muslim Brotherhood affiliates.

All the targeted regimes seized on Islamist support for the uprisings to smear the protesters as religious extremists and “terrorists.”

In Egypt, the Muslim Brotherhood may have taken pains to prevent the uprising from appearing Islamist-influenced, but there’s no question about the role of religion in the aftermath. Millions of Egyptian voters bought into the Muslim Brotherhood’s key slogan, “Islam is the solution,” devastating liberal activists, who’d advocated a more secular democratic model.

That frustration is shared in other Arab nations where liberal young revolutionaries who galvanized the rebellions now find themselves marginalized as the better-organized Islamists slide into vacant leadership posts. Analysts say revolutionary youth must be included in the new political frameworks or Islamist-led governments could face revolts.

“Tunisia is more advanced on this issue than other countries, and we’ve seen youths taking leading positions in the government. They’re considered a crucial element in reform and progress of the revolution,” said Omar al-Hassan, the head of the Gulf Center for Strategic Studies, a London-based research center for Middle Eastern affairs.

“As for Egypt,” al-Hassan said, “there was no leadership for those youth who fueled the revolution. I don’t want to say their revolution was hijacked, but things went in a different way.”

So far, the Muslim Brotherhood in Egypt, Nahdah in Tunisia and other mainstream Islamists throughout the region have offered assurances to their many critics, treading carefully so as not to squander their newfound authority and freedom. While they make little secret of their long-term goal of establishing Islamic states, analysts said, for now they’re willing to strike shrewd deals with non-Islamist blocs and focus on collective grievances such as unemployment, inflation and the lack of security.

Ghozlan said that, apart from constitutional reforms, the Muslim Brotherhood’s parliamentary priorities would be repealing the dreaded emergency law, which allows for arbitrary and open-ended detentions, and finding ways to boost Egypt’s devastated economy.

“As this is the first time for Islamists to move from opposition seats to lead the country, they are very cautious not to frighten their internal or external adversaries,” said Khalil al-Anani, an expert on Islamist movements at Durham University in the United Kingdom. “Hence, the assurances they give to others are a part of a transition process that is taking place within these movements since the revolution, rather than an attempt to manipulate their rivals.”

The wild card, however, is the literalist Salafist movement, which is popular throughout the region. Arabic-language news reports say wealthy sympathizers in the oil-rich nations of Saudi Arabia and Qatar are funneling cash to Salafist groups in transitional countries, even as they crack down on any signs of rebellion in the Persian Gulf region.

The Salafists are becoming a more visible constituency in Tunisia and Libya, with their black flags hanging from storefronts and a noticeable increase in fully veiled women in the streets, stoking fears that the moderate Islamist agenda could harden with the rise of the fundamentalists.

Egypt’s Salafists, who captured a surprising quarter of parliamentary seats, hope to push the more moderate Muslim Brotherhood to the right by rallying the conservative base behind the immediate application of strict Shariah law. Some clerics already have called for banning alcohol and bikinis and shrouding pre-Islamic artifacts from the time of the pharaohs.

Al-Anani, the Durham University expert, said he thought that worries about support for the Salafis were overblown, calling it a “bubble phenomenon that will blow very quickly if its leaders don’t change their rhetoric and become more realistic.”

“Even if they garnered 25 percent of the parliament, their religious credentials will not help them if they do not deliver massive social and economic services,” he said.

The Muslim Brotherhood has distanced itself from extreme Salafi stances in a flurry of public statements.

Still, the rhetoric of the movement only deepens the concern of Arab liberals and Western powers alike: How to support the Arab Spring’s calls for free and fair elections, when all signs point to Islamists as the biggest victors?

“ ‘Vote for us to go to paradise! Don’t vote for those bloody liberals who marry their sisters!’ ” said Refaat Said, the chairman of Egypt’s leftist Tagammu Party, mocking the Salafist campaigning. “This type of propaganda is in all the mosques, five times a day, at every prayer.”

“We got what we wanted, but after a revolution, on whom do you depend? God?” Said asked. “You’ve lost your way out of the situation if you only depend on God.”