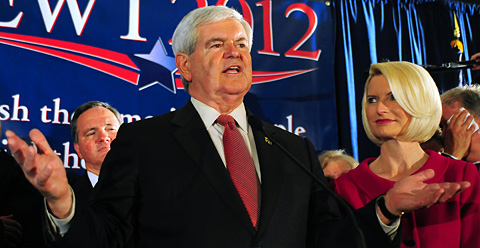 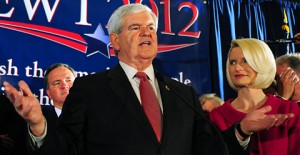 Mitt Romney came in second, a crushing loss for the one-time front-runner. Gingrich, 68, the former congressman from Georgia and speaker of the House of Representatives from 1995 to 1999, surged in the last five days to score the dramatic victory. His commanding performances in two debates this week turned the tide in South Carolina.

Romney, 64, the former governor of Massachusetts, finished a disappointing second, after watching his double-digit lead in state polls evaporate amid charges that he’s a wealthy corporate raider with something to hide in offshore bank accounts and personal tax records that he’s declined to disclose.

The results signaled a party unwilling or unable at this early stage to rally to any one candidate as their champion to challenge President Barack Obama in the fall. With a recount in Iowa changing the initial result, the party now has produced three winners in as many states: Santorum in Iowa, Romney in New Hampshire, and now Gingrich in South Carolina.

The head-snapping turn of events over five days saw Romney end the week having lost two out of the first three contests. As late as Tuesday, he thought he had won Iowa, knew he’d won New Hampshire, and led by a comfortable margin in South Carolina, where every winner since 1980 has gone on to win the Republican nomination.

At stake Saturday were 25 delegates, with 1,144 needed to clinch the nomination at the Republican National Convention in Tampa the final week of August.

Next up: a slugfest in Florida, with two high stakes debates before voting — which started Saturday — ends on Jan. 31.

Romney went out swinging, signaling that he’ll escalate his attacks on Gingrich as the race heads to Florida and beyond.

“We’ve still got a long way to go…and work to do,” Romney told supporters in Columbia. “We’re now three contests into a long primary season. This is a hard fight because there is so much worth fighting for.”

He took a veiled shot at Gingrich for his criticism of Romney’s record as a private-equity fund capitalist.

“When my opponents attack success and free enterprise they’re not only attacking me, they’re attacking everyone who dreams of a better future. They’re attacking you”,” he said. “The Republican Party doesn’t demonize success,” he said, adding that any Republican who does is “not going to be fit to be our nominee.”

For Gingrich, the win was a remarkable comeback for a man given up for politically dead twice already in this campaign.

His staff quit last summer as he languished in the polls and his fundraising dried up. He came back to take the lead in Iowa in December, only to crash again, buried by a deluge of negative ads from Romney, his allies and Paul.

Gingrich’s debate performances — freewheeling, confident, defiant — reminded Republicans how much they hunger for a full-throated champion.

His record reminded skeptics of how tumultuous life with him can be — with a TV interview with his second of three wives, blunt comments from former colleagues about why his own party in Congress threw him out as leader, and the anniversary Saturday of the day the same House voted to reprimand him for unethical conduct.

For Romney, it was a jolt for the man with the most money and the most support from the party establishment, including South Carolina Gov. Nikki Haley.

Smooth and in command through the fall, Romney stumbled through the week in South Carolina. He hemmed and hawed when pressed in a Monday debate to release his personal tax records, then did it again when the question came up in a Thursday debate. Asked pointedly if he would follow the example set by his father when he ran for president in 1988 and released 12 years worth of tax records, he said, “Maybe.”

South Carolina voters were divided between the two candidates topping the polls.

Gingrich’s three marriages and admissions of affairs made no shred of difference to many voters, including Rema Thomas, 60, of Chapin, an evangelical who decided on Gingrich after watching the two S.C. debates.

“No one does not have baggage. Newt’s was just exposed more because of his time in politics,” she said. “I think it’s time for a bulldog president. Grab ‘em by the pants leg and don’t leg to until you draw blood. That’s Newt.”

Thomas said she knows Gingrich is a “hot head,” but with the sorry state of the country and a questionable crowd running the show in Washington, “what do we have to lose?”

“I like Mitt Romney. He’s the only guy who can beat Obama,” said Tim Walker, a general contractor from Columbia.

But Romney, who watched a double-digit lead here five days ago evaporate, had to contend with voters jumping on the Gingrich bandwagon instead.

“I don’t think Romney is the best person to put forward,” said Nikki Trawick a, business woman from Columbia who was voting for Gingrich.

Many voters said the two South Carolina debates held in Myrtle Beach and Charleston this week were game changers, convincing South Carolina that Gingrich could take the fight to Obama in November — and simultaneously pound the media.

“One of the worst things in this country is the media,” said Steve Chase, 61, of Chapin, who voted for Gingrich on Saturday. “They have an agenda. And (Gingrich) is the only one, probably since Reagan, who stands up to them.”

Santorum faced a test of whether his appeal to social conservatives would pay off, particularly in a state where 60 percent of primary voters in 2008 called themselves born-again or evangelicals.