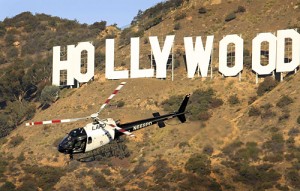 LOS ANGELES — As the sun set over the Hollywood Hills park where police spent Wednesday searching for human body parts, they still didn’t have a name to go with the man’s head discovered there a day earlier.

(PHOTO: A Los Angeles Police Department helicopter searches a steep canyon as part of a task force investigating the slaying of a man believed to be of Armenian descent near a hiking trail below the Hollywood sign in Los Angeles, California, on Wednesday, January 18, 2012.)

What they did have were two hands and two feet. Authorities were optimistic that the hands were in good enough condition to obtain fingerprints.

The homicide investigation began Tuesday afternoon after two dog walkers in Bronson Canyon Park noticed their dogs playing with a plastic bag and went to inspect it.

Inside was a man’s head. His hair was graying. Police said he appeared to be in his 40s, possibly of Armenian descent, and that he probably had been dead for a day or two.

A “cadaver dog” from the Los Angeles County coroner’s office found one hand, and later the other, in brush not far from where the head was discovered.

Unlike the head, they were not in bags.

Then, as officials were about to leave for the day, the feet were found.

Detectives believe that the killing happened elsewhere and that the body — or at least some of the parts — were dumped in the park.

“We’re hoping we can find more remains,” said LAPD Cmdr. Andrew Smith, adding that wild animals may have moved some of the body parts.

Without many answers, local residents were left to speculate. Some said that the body parts must have been deposited in the park after Tuesday morning.

At least 10 people walk their dogs each morning over the same terrain where the head was left, said Liam Lefevour. One of those dogs — maybe Tiger, his own 4-year-old greyhound and pitbull mix — would have found the head, he said.

Lefevour said he the whole situation was “freaky.”

Others seemed to relish playing armchair detective. Most of their crime knowledge comes from movies and television.

“It’s a real-life ‘Sopranos’ situation,” Ann Marie Spinelli said as she hiked a nearby ridge.

Spinelli, her sister and mother hypothesized that the killer was trying to make it impossible to identify the victim.

“We’re assuming the body would be far away,” said the sister, Karen Madigan. “There’s no other reason to cut off the head.”

The search was expected to continue Thursday morning.