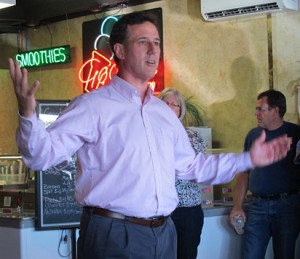 The final certified vote tallies from the Iowa GOP caucuses show Rick Santorum edging Mitt Romney by 34 votes, reversing the reported order of finish two weeks ago, when Romney was said to have won by just eight votes.

But there’s a big asterisk appended to the result. Results from eight of Iowa’s 1,774 precincts couldn’t be certified, meaning that the true victor in the caucuses may never be known. Santorum finishes with 29,839 votes and Romney with 29,805 votes. Ron Paul came in third.

Still, politics is a binary system. There has to be a winner and a loser, so Santorum’s campaign is claiming victory and moving on. “We know we won Iowa,” said Santorum’s top strategist, John Brabender, after the results were released.

What it does mean is that Romney’s claim to have made history by winning Iowa and New Hampshire back-to-back is out the window. In a statement, Romney called the result a tie while acknowledging Santorum’s “strong performance.”

Santorum’s campaign is waiting for a concessionary phone call from Romney. “We’re going to see firsthand today what kind of character Mitt Romney has,” Brabender said.

The certified result, he said, “makes the score one to one,” he said, adding that Romney could no longer claim he had won both states and imply that his nomination his inevitable. “It takes that entirely off the table.”

He said Santorum’s campaign would be boosted by Rick Perry’s withdrawal from the race—despite reports that Perry will endorse Gingrich. Santorum, he said, will now be running against “one libertarian and two moderates.”

Both campaigns will be able to inspect the documents originating from each precinct in order to satisfy themselves with the accuracy of the results, the Iowa Republican Party said Thursday.