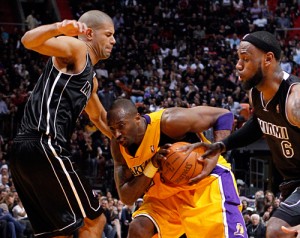 MIAMI — LeBron James balked at the implication going in, that this somehow was himself vs. Kobe Bryant, even with Miami Heat teammate Dwyane Wade again sidelined by a balky right ankle.

James then nearly made the debate moot when he missed the morning shootaround with flu symptoms.

(PHOTO: The Miami Heat’s Shane Battier, left, and LeBron James defend the Los Angles Lakers’ Kobe Brynat in the fourth quarter at the American Airlines Arena in Miami, Florida, on Thursday, January 19, 2012. The Heat held off the Lakers, 98-87.)

Ultimately, James found himself with ample support, in a 98-87 victory Thursday night over the Los Angeles Lakers that lifted the Heat to 5-0 in Wade’s absence this season and 10-4 overall.

“I just wanted to be there for my teammates,” he said, after finishing with 31 points, eight rebound and eight assists.

And they were there for him, from Shane Battier’s defense against Bryant, to Chris Bosh’s 15 points and eight rebounds, to Eddy Curry making it all the way back in his battle of the bulge.

For those keeping score, yes, it made it 11-5 LeBron over Kobe in their 16 career matchups, and it also gave James a victory in his first matchup against Lakers coach Mike Brown, his coach for five seasons with the Cleveland Cavaliers.

On this night, Bryant didn’t prove much, shooting 8 of 21 from the field for 24 points.

With Wade out, coach Erik Spoelstra inserted Battier into the starting lineup in place of James Jones, and Battier took over from there, harassing Bryant into a 1 for 8 first half.

“Kobe and I have had a lot of battles, 10 years of battles,” said Battier, who also sparked the offense with three 3-pointers. “There’s no one in this league I respect more than Kobe.”

There also was respect in the locker room for what Curry did in his six minutes, and for more than his six points and three rebounds.

Spoelstra closed the first quarter by giving Curry his first NBA action since Dec. 17, 2009, while Curry was with the New York Knicks.

“It felt great,” Curry said of the ovation that greeted his entrance. “I didn’t know what to expect. I’ve been working hard for this moment. It’s the first of many. It’s a long way to go.”

Curry, who dropped an estimated 100 pounds since his initial bid for a Heat job last spring, moved well in his brief stints.

“He has been tremendous with his work and commitment,” Spoelstra said. “We started this process last spring. He did a lot of work on his own to get the opportunity to join our training camp. It’s great to see him make the most of it and get to this point.

“He has come a long way, and we’re all very encouraged by it. It is a big step forward.”

For the most part, Curry kept pace with play.

“He gave us good minutes, good energy,” Spoelstra said. “It was a pleasure for all of us to see him out there, in a game situation.”

There was a degree of pleasure of also seeing James make it to the gym for the opening tip.

“There were a few times I felt exhausted,” he said. “A chest cold can get to you at times.

But this was more than James playing through his ills. It also was about the Heat’s 3-point shooters picking up where they left off in the Tuesday rout of the San Antonio Spurs that snapped a worrisome three-game losing streak.

“It will continue to be a weapon for us,” Spoelstra said of the long ball.

And it was the Heat getting back to their defensive standards.

“It’s good to pull our defense together,” Bosh said. “We were kind of falling behind.”

Even with Wade sidelined for a second consecutive game with that sprained right ankle, the Heat came out in attack mode, particularly Battier.

With Battier taking the challenge against Bryant, it alleviated some of the burden on James. James instead put himself on a triple-double pace early with 13 points, six assists and four rebounds in a first half that ended with the Heat up 52-37.

Amid that start, James crashed into Miami Marlins owner Jeffrey Loria while scrambling to save a ball from going into the front row across from the Lakers bench. During a halftime interview, James said he had no idea who he had toppled over.

While the Lakers’ front-line length was a concern going in, the Heat got a break when center Andrew Bynum was called for back-to-back fouls midway through the first quarter, forcing him to the bench. Bynum finished with 15 points, 12 rebounds, with power forward Pau Gasol offering the most consistent Lakers effort with 26 points and eight rebounds.

The Lakers shot .310 from the field in the first half, their lowest shooting percentage in any half this season.

Also in the first half, Bosh grabbed his 4,000th career defensive rebound.