Gingrich surging in S.C., but cloud shadows his campaign 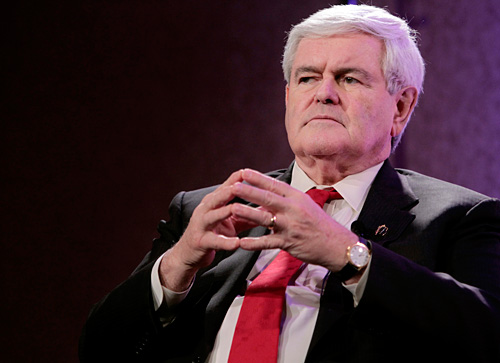 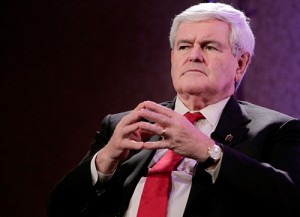 WARRENVILLE, S.C. — Newt Gingrich was surging in South Carolina hours before the state’s crucial Republican primary Saturday, but in typical Gingrich roller-coaster fashion, a late-breaking scandal threatened to derail his campaign just as it was peaking.

A series of South Carolina polls released Thursday showed Gingrich closing the gap with front-runner Mitt Romney, and several showed the former speaker of the House of Representatives edging into the lead. In addition, Rick Perry endorsed his onetime rival as the Texas governor dropped out of the race.

Gingrich’s commanding performance in Monday night’s debate galvanized his campaign. All week he’s been drawing the loudest, most eager crowds. He appeared to be peaking just as Thursday night’s final pre-primary debate gave him an opportunity to break through to a stunning victory Saturday, possibly upsetting the dynamic of the Republican presidential campaign.

Except that at that very moment an unexpected thundercloud burst over the Gingrich campaign: ABC News released excerpts from Thursday night’s “Nightline” featuring his second wife, Marianne, saying that her husband had wanted her to stay married to him while he had an affair with a young House aide named Callista Bisek, whom he’s since married.

Gingrich, she said, asked whether she would “share” him with Bisek.

“And I just stared at him and he said, ‘Callista doesn’t care what I do,’” Marianne Gingrich told ABC. “He wanted an open marriage and I refused.”

She said her husband “always called me at night and always ended with ‘I love you.’ Well, she was listening.”

All this was occurring while Gingrich was leading the impeachment of President Bill Clinton on charges of lying in court proceedings about his own extramarital dalliances.

It’s not clear what impact these revelations may have on the primary, but 60 percent of South Carolina GOP voters in the 2008 primary identified themselves as evangelical Christians, and with their social conservative values, they may find this hard to forgive in a would-be president.

Still, polls showed Gingrich surging in the state. An NBC-Marist poll showed Romney leading Gingrich by 15 points Monday, but after that night’s debate, Romney’s lead shrank to 5 points by Tuesday night. On Thursday a more recent Rasmussen Reports poll had Gingrich ahead by 2 points, an InsiderAdvantage survey put him up by 3 points and a Public Policy Polling survey showed him ahead by 6 points.

Gingrich’s career has been filled with dramatic ups and downs. Many voters can’t get past his record as a disorganized, polarizing figure who made millions as a Washington insider, had to pay a $300,000 penalty for ethical lapses while he was speaker and has been scorned by many former colleagues. Many voters here already were troubled by his personal life before Marianne Gingrich’s TV tale emerged.

“I like Newt, but I’m really struggling with my vote. I’m scared he has too much baggage,” said Craig LaCross, a Florence small businessman.

Gingrich fires up crowds with his empathy for people’s long-simmering fury with Washington. Many of his supporters are the same folks whose rage at the government fueled the tea party movement, which helped elect dozens of Republicans to Congress in 2010. Many are out of work, or they worry deeply about financial security, in a state where the unemployment rate remains well above the national average.

“Romney’s OK, but we want to go past that. You ever have a boss who was tough, but made you do your best?” asked Joe Duke, a retired Florence chemist. He compared Gingrich to the late Apple Inc. co-founder Steve Jobs, who was known as a hard taskmaster.

“He was a hard guy to work with, but he’d push and push,” Duke said.

Romney often comes across to the frustrated as the kind of guy who helped make their lives miserable.

Tim Washburn of Aiken, who’s unemployed, explained politely that while “I don’t really think Romney put people out of work, people are getting laid off because companies wanted to make more money, and that philosophy is hurting people like me.”

The Romney campaign sees Gingrich as a serious threat in South Carolina, a state it hopes to win, which would help create an aura of inevitability that the nomination is his.

Gingrich has fallen from the heights before. His Republican troops pushed him out of the speakership after four years of controversy. He had a big lead in early December in South Carolina and other states. He tumbled as opponents, notably Romney, blanketed television in early voting Iowa and New Hampshire with ads that recalled Gingrich’s foibles, and as establishment conservatives from George F. Will to the National Review pronounced him unfit for the presidency.

Beth Lechner, a Columbia teacher, is torn between the two, but she worries about Gingrich’s “baggage.”

Preston Dawkins, a Florence lawyer, is leaning to Romney because “it’s the electability issue, and I appreciate someone with no skeletons in his closet.”

Analysts say primary elections are often head vs. heart decisions, since no one is picking a president, just a nominee, and often the candidates’ differences on issues are small. Should people cast a protest vote for an emotional favorite, or make a somber choice about who has the best chance to win the White House?

He talks from the gut, and he has a feel for local concerns. At a Florence art gallery, he spoke about the need to deepen local ports and build a new interstate highway in eastern South Carolina. In Warrenville, he explained responsibility by recalling a conversation with Ronald Reagan’s son Michael. When Michael was 10, he wanted a 10-speed bicycle. His mother, actress Jane Wyman, told him he could have it if he could pay for it.

I’m 10, Michael replied. How can I do that? Wyman gave him a loan and made him sign a promise to pay back the money, and he did, by selling newspapers in front of a Beverly Hills church.

“He got his bike,” Gingrich said. “He learned responsibility.”

The crowd loved it. Gingrich gets them.

“I’m very impressed,” said North Augusta retiree Emily Lamb, who was deciding between Romney and Gingrich. “It was a tough choice, but I think Romney’s a little bit to the left.”

Linda Pennington of Aiken and her two friends walked out of a Gingrich rally still undecided. It may have been a rousing show, but one rally doesn’t make the man.