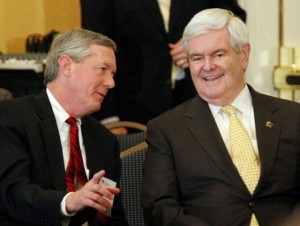 Romney, whose wealth is estimated at around $250 million, has come under fire for not making his tax returns public, as presidential candidates traditionally do. He said he pays an effective rate “probably closer to the 15 percent rate than anything,” and that he would release his tax returns in April.

In the last decade, he said, his income has come largely from investments rather than earned income. Since Bush-era tax cuts went into effect, dividends and capital gains are subject to a 15 percent tax rate; the top rate on ordinary income is 35 percent.

Gingrich warned that if Romney’s tax returns contain some problem, President Barack Obama’s campaign would exploit it in the fall. “You do not want a nominee who blows up in September, because in September you have no choice,” Gingrich said.

Gingrich, energized by a feisty Monday night debate performance, urged South Carolina conservatives to rally behind him as the candidate who could best take on Obama. When a supporter suggested that Gingrich could “bloody Obama’s nose,” Gingrich replied: “I don’t want to bloody his nose, I want to knock him out.”

Both candidates, along with Texas Gov. Rick Perry, campaigned at separate events Tuesday in Florence. With four days to go before the South’s first Republican presidential primary of 2012, interviews with voters suggested that many people are still trying to decide.

“Gingrich cleaned their clocks at the debate,” said Kathy Dore, a Florence retiree. But she was still undecided. “I like to see candidates up close and personal,” she said.

“I do think Gingrich will blow out Obama in debates,” said Johnny Valentine, a Florence retiree, but he also likes other candidates. “I may just write their names down Saturday and pull one out.”

The candidates will debate again Thursday in Charleston.

A Romney win Saturday in South Carolina would all but guarantee that he’ll win the GOP presidential nomination after his skin-tight Iowa caucus victory and big New Hampshire primary triumph. But should any of his four remaining challengers defeat the former Massachusetts governor, they would be instantly anointed as the prime conservative alternative to him.

“A vote for Santorum or Perry is a vote for Romney to be the nominee,” Gingrich said. He later told reporters that “there’s no evidence he (Santorum) can put together a national majority.”

Gingrich masterminded the 1994 congressional campaign, when Republicans regained control of the House of Representatives for the first time in 40 years. Santorum was crushed in his 2006 Senate re-election bid in Pennsylvania.

“Santorum is a nice guy, but he doesn’t have any of the knowledge of how to do any of this,” Gingrich said.

Gingrich said he understood why his rivals would not leave the race, though. “I’m very aware that in June or July, everybody said I should drop out of the race,” he said, recalling a time when his campaign was in turmoil. “The guy who was dead is still here.”

Gingrich was in a joking mood as he spoke to a standing-room-only crowd of about 300 at a downtown Florence art gallery. Someone asked about the prospect of the vice presidency. “I can’t imagine a presidential candidate who’d want to have me,” Gingrich said.

Gingrich spent most of Tuesday blasting Obama, saying, “I want to be the paycheck president, not the food stamp president.” Gingrich charged Monday that “more people have been put on food stamps” by Obama than any other president.

At the White House, press secretary Jay Carney, who had largely refrained from getting involved in campaign skirmishes, branded that claim “crazy.” The worst recession since the 1930s resulted in a “dramatic increase” in people needing assistance, he said.

Santorum, who plans a full day of upstate campaigning on Wednesday, denounced as “dirty politics” robo-calls from Romney supporters. The calls reminded people that Santorum backed Romney for the 2008 Republican presidential nomination.

In Columbia, Texas Rep. Ron Paul got the support of state Sens. Lee Bright and Kevin Bryant of Spartanburg, and Danny Verdin of Greenville. They all represent parts of the highly conservative upstate region.

Paul campaigned in Spartanburg, where an audience member asked if he would run as an independent if he doesn’t win the GOP nomination.

“The question is premature,” he answered. “We want to wait until Saturday — not to see how I do, but to see how we all do.”

But, Paul added, “It’s not likely. I don’t want to give anybody the satisfaction that I’ve conceded the race. Right now, we’re thinking about Saturday.”