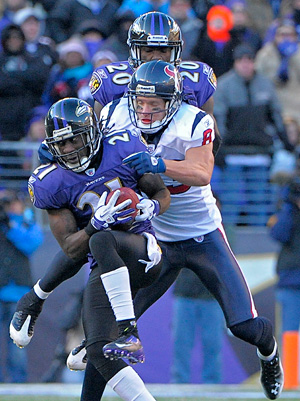 By Jeff Zrebiec, The Baltimore Sun –

BALTIMORE — Unable to move the ball for nearly three quarters on offense, the Ravens turned to a familiar formula to prolong their season and book their trip to the AFC title game.

The Ravens forced four turnovers and shut out the Houston Texans in the second half, securing a nail-biting 20-13 victory in front of an announced 71,547 fans, the biggest football crowd in M&T Bank Stadium history.

The Ravens forced three interceptions by rookie quarterback T.J. Yates, including Ed Reed’s pick just outside the end zone with 1:51 to play as the Texans were trying to score the game-tying touchdown on Sunday.

Houston got the ball back once more with under a minute to play, but the Texans couldn’t get a first down as Reed knocked down a pass in the end zone. Reed landed awkwardly on his left ankle and needed help to the sidelines.

The victory puts the Ravens into the AFC championship game for the third time in franchise history and the first since the 2008 season. They will play the New England Patriots next Sunday at Gillette Field.

The Ravens had a chance to take a two-score lead late in the third quarter. They drove deep in Texans territory, taking advantage of Lee Evans’ gorgeous 30-yard catch down the right-sideline. Left guard Ben Grubbs recovered a Ray Rice fumble on second down, putting the ball on the Houston 2.

Rice got 1 yard on third down and Ravens coach John Harbaugh opted to go for it on 4th-and-goal, rather than take the field goal which would have given the home team a 7-point lead. Rice was stuffed on a great play linebacker Tim Dobbins.

The Ravens finally scored again on Billy Cundiff’s 44-yard field goal with 2:52 to play, giving them the 20-13 lead. They drove 45 yards on 10 plays before Cundiff’s kick. That ended a near 45-minute scoring drough.

The Ravens’ first home playoff game since 2007 got off to an auspicious start as Danieal Manning returned Cundiff’s game-opening kickoff 60 yards to the Ravens’ 41.

The Texans got one first down before safety Ed Reed stopped Pro Bowl running back Arian Foster on a 3rd-and-1, forcing Houston to settle for a Neil Rackers’ 40-yard field goal and a 3-0 lead.

The Ravens then failed to get a yard on their first three plays but they were given a reprieve — and about the best possible field position — thanks to a dumb decision by Texans punt returner Jacoby Jones. He tried to field Sam Koch’s booming 71-yard punt on the bounce and the ball hit off his hands as Jones was hit by Cary Williams.

Rookie Jimmy Smith recovered it at the Texans’ 3, and three plays later, Flacco hit blocking tight end Kris Wilson on 3rd-and-goal from the 1-yard line. It was not only Wilson’s first touchdown of the season, it was his first catch as a Raven. It was also his first touchdown since Wilson, as a member of the San Diego Chargers, hauled in a 13-yarder in an AFC Divisional Playoff game against the New York Jets in 2010.

After a three-and-out by the Texans, the Ravens got the ball at their own 40, and a 21-yard completion to Anquan Boldin advanced it into Houston territory. Flacco was sacked on 3rd-and-4 from the Texans’ 27, but that didn’t prevent Cundiff from booting a 48-yard field goal that gave the Ravens the 10-3 advantage.

It grew to 17-3, thanks to another Texans mistake. Yates was picked off by Lardarius Webb, who stepped in front of Andre Johnson to give the Ravens the ball at Houston’s 34.

A 20-yard completion to Rice on 3rd-and-9 set up Flacco’s 10-yard touchdown pass to Boldin in the right side of the end zone. Flacco’s second touchdown pass just got over the arm of Jason Allen and got into the hands of Boldin, who had missed the final two games of the regular season after having knee surgery.

The Texans had allowed only an NFL-low 39 points in first quarters this season, but just like that, the Ravens led 17-3 with just 1:13 left in the first quarter.

However, as much as the Ravens dominated the first quarter, the Texans controlled the second, largely riding Foster. He touched the ball on five of 10 plays, including runs of 7 and 19 yards, and a 16-yard catch on 3rd-and-3, as the Texans advanced into the red zone. However, two consecutive Yates’ incompletions forced a Rackers 33-yard field goal, which cut the Ravens’ lead to 17-6.

Houston got the ball right back and on its first play, Foster rushed 28 yards down the left sideline. Yates then hit Johnson for 12 and 13 yards, and Foster rattled off runs of 14 and 6 yards to get inside the red zone. Yates hit Foster for 12 yards on 3rd-and-9 to create a first-and-goal situation.

On 3rd-and-goal from the 1, Foster plunged into the end zone to cut the Ravens’ lead to 17-13. On the drive, Foster carried six times for 50 yards and caught one pass for 12 yards.

He finished with 27 carries for 132 yards and a touchdown.