Perry says Marines who urinated on dead bodies are ‘kids’ 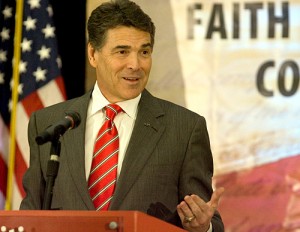 WASHINGTON — Texas Gov. Rick Perry, who has been campaigning furiously in South Carolina in an effort to revive his sputtering presidential campaign, said Sunday that the Obama administration has gone “over the top” in criticizing Marines who were videotaped urinating on Afghan corpses.

“Obviously, 18-, 19-year-olds make stupid mistakes all too often, and that’s what’s occurred here,” Perry said in an appearance on CNN’s “State of the Union.” He likened the incident to Gen. George S. Patton Jr. urinating in the Rhine River and Winston Churchill supposedly doing the same thing on the Siegfried Line.

“What’s really disturbing to me is just, kind of, the over-the-top-rhetoric from this administration and their disdain for the military,” said Perry, who has been wooing the military vote as well as evangelicals.

Defense Secretary Leon Panetta has called the incident “utterly deplorable” and said those responsible will be “held accountable to the fullest extent.”

President Barack Obama “shares in the sentiments expressed by Secretary Panetta,” the White House has said.

The incident is under investigation. The four Marines, based at Camp Lejeune, N.C., could face charges under the Uniform Code of Military Justice.

“These kids made a mistake, there’s no doubt about it,” Perry said. “But to call it a criminal act, I think, is over the top.”

On the same CNN program, Sen. John McCain, R-Ariz., said the administration’s response has been appropriate. McCain, a Vietnam veteran and former prisoner of war, called the incident “a breakdown in discipline” that harms the war effort.

“I think a full and complete investigation is entirely appropriate,” he said, noting: “We’re trying to win the hearts and minds” in Afghanistan.