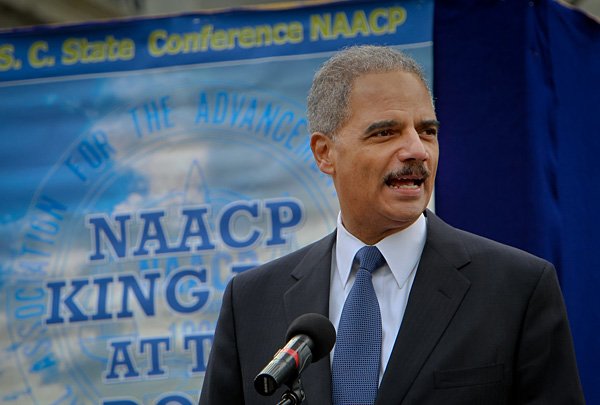 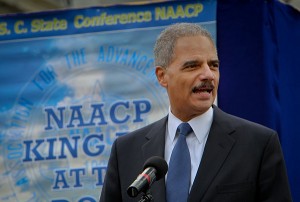 LOS ANGELES — U.S. Attorney General Eric H. Holder Jr. on Monday pledged to use the full force of the Justice Department to defend the Voting Rights Act, one of the keystones of the civil rights movement of the 1960s.

(PHOTO: In his bluntest comments to date, Attorney General Eric Holder warned Monday that voting rights, particularly for minorities, are under assault in some states.)

Speaking in Columbia, S.C., on the federal holiday honoring the birth of assassinated civil rights leader Martin Luther King Jr., Holder defended the goals of the Voting Rights Act. The law prohibited practices that prevented African-Americans from going to the polls, and it gave federal agencies new powers to ensure that voting was more accessible. It went into effect in 1965 and has been extended four times, most recently in 2006.

“Protecting the right to vote, ensuring meaningful access, and combating discrimination must be viewed, not only as a legal issue, but as a moral imperative,” Holder said, according to prepared remarks distributed by the Justice Department. “And ensuring that every eligible citizen has the right to vote must become our common cause.

“Let me assure you, for today’s Department of Justice, our commitment to strengthening — and to fulfilling — our nation’s promise of equal opportunity and equal justice has never been stronger,” he said later.

Perhaps no other piece of legislation that emerged from the civil rights battles of the 1960s and 1970s was as important as the Voting Rights Act. The law abolished the legal chains that prevented African-Americans from casting votes — and eventually winning political power — in a variety of jurisdictions in the South as well as other parts of the country. The measure has been a cornerstone as well in efforts by other groups, such as Latinos, to flex electoral muscles.

The battle over greater accessibility to voting has been going on for centuries and becomes especially significant in presidential years like 2012. In general, Democrats have pushed for more access, reflecting their electoral strategy of registering young people and minorities. Conservatives, in general, oppose broadening the vote, saying that it’s an unfair intrusion of the powers of the federal government. A smaller electorate also helps the GOP.

“Despite our nation’s record of progress, and long tradition of extending voting rights,” Holder said, “today, a growing number of citizens are worried about the same disparities, divisions and problems that Dr. King fought throughout his life to address and overcome. In recent months, in my travels across this country and here in South Carolina, I’ve heard a consistent drumbeat of concern from citizens, who, often for the first time in their lives, now have reason to believe that we are failing to live up to one of our nation’s most noble ideals; and that some of the achievements that defined the civil rights movement now hang in the balance.”

Holder said the Justice Department has opened more than 100 investigations in the last year of local actions that were deemed to have violated the Voting Rights Act. “We’ve also had significant success, without litigation, in encouraging voluntary improvements and compliance,” he said.

He noted that critics argue that some parts of the Voting Rights Act are no longer needed because voting has become more open.
“I wish this were the case,” Holder said. “But the reality is that, in jurisdictions across the country, both overt and subtle forms of discrimination remain all too common. And though nearly five decades have passed since Dr. King shared his vision from the mountaintop — despite all the progress we’ve made, the barriers we’ve broken down, and the divisions we’ve healed — as a nation, we have not yet reached the Promised Land.”

The South Carolina law requires voters to show photo identification before being allowed to cast a ballot. At least seven states tightened their voting requirements last year. In all, about 23 states require some form of identification.

Opponents say photo identification can make it harder to cast a ballot, meaning the practice can be discriminatory.