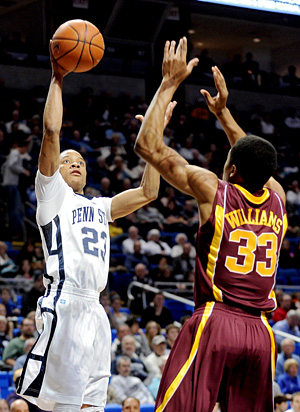 STATE COLLEGE, Pa. — Can this be the start of something?

After losing their first four Big Ten games, the Minnesota Gophers find themselves heading home fresh off a two-game winning streak and full of a new confidence after beating Penn State, 80-66, on Sunday at Bryce Jordan Center.

Freshman Joe Coleman had a career game with 23 points, five rebounds and a 13-for-14 performance at the free-throw line, buoying a slow-starting Gophers team to a solid finish after they held off three Penn State runs.

“(Coleman has) played that way from Day 1; he’s just such a hard worker, such a committed player that you knew he was just going to eventually blossom,” coach Tubby Smith said of Coleman, who was making his third consecutive start and came in averaging 4.5 points per game. “And now he’s making free throws and the more he makes the more confident he gets and the more confidence we have in him.”

Julian Welch (15 points), Rodney Williams (14) and Austin Hollins (12) also finished in double digits for the Gophers (14-5, 2-4 Big Ten), who shot 55.3 percent from the floor, including 50 percent (5-for-10) from three-point range. They hope their success will continue as they head back to Williams Arena, where they take on Northwestern on Sunday.

“That’s definitely a big confidence-booster after losing four in a row and two of them at home,” Williams said. “We should be ready to get back home and finally get a Big Ten win there — because it’s been a while.”

The Gophers sparked the modest streak Thursday, stunning No. 7 Indiana 77-74. But perhaps the bigger test was Sunday, when the Gophers needed to keep the momentum going and prove the Hoosiers game was not a fluke.

But if this team is going to start something new, the Gophers need to get rid of a lot of the old. Sunday, they built a 44-33 lead 3:17 into the second half. But about 4½ minutes later, it was nearly gone after an 8-0 Penn State run shrunk its deficit to three.

This time, the Gophers were able to snatch it right back. Coleman scored off an offensive rebound, starting an 11-0 run that also included a three-pointer by Hollins and a three-point play from Elliott Eliason.

The Gophers couldn’t make a full-fledged blowout of it, as the Nittany Lions crawled within striking distance a couple of times. But they held on in part by going to the free-throw line 44 times, making 33.

“I think we just had a couple of defensive breakdowns,” Coleman said. “Some guys subbed in and we really didn’t communicate who had who. It was really on us for communication — we didn’t focus in on that.”

After the Gophers jumped out to an early 7-2 lead, Penn State (9-10, 1-5) took control on a layup by Tim Frazier and swept up the momentum, dictating the pace for most of the half. Frazer’s drives seemed impossible to stop, and the Gophers looked lethargic.

But with seven minutes left, the Gophers got consecutive three-pointers from Julian Welch and Chip Armelin, and Coleman then sparked a 12-6 run with 10 points in the final five minutes to put them up 33-31 at the break.

“He’s just relentless and just a hard-nosed kid,” Smith said of Coleman. “And that’s what we needed, we needed that toughness and he brings it every day in practice and he’s been a big, big key to the way we’ve played lately. His energy and enthusiasm has helped.”