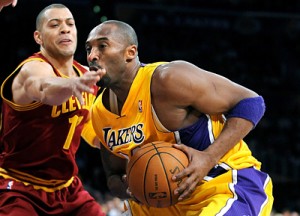 LOS ANGELES — Mike Brown has seen Kobe Bryant play in 13 games as Lakers coach now and still he is amazed with Bryant’s ability to ignore critics and pain.

Bryant silenced critics 10 days ago who said he took and missed too many shots against Denver by scoring 37 points in his next game.

And two more 30-plus games after that.

Yet Brown is even more astonished by the fact Bryant is averaging a league-high 30.3 points a game despite torn ligaments in his right wrist.

“I think he’s a machine,” Brown said. “There’s no way you have a torn ligament and shoot the way you shoot when you’re getting doubles and guys are all over you.”

As prolific as Bryant has been lately, it took old-fashion defense to lock down the Lakers’ fifth consecutive victory.

After leading by as 19 points in the third quarter, the Lakers found themselves fighting to hold off the Cavaliers, who cut the lead to three.

Cavaliers guard Daniel Gibson missed a 3-pointer that would have tied the score with 6:36 left, and the Lakers’ Matt Barnes answered with a dunk to end the Lakers’ 0-for-8 cold spell.

Whatever anxious moments Brown might have felt about facing Cleveland, where he coached for five seasons, they quickly disappeared as the Lakers took an early lead and held on for a 59-41 halftime advantage.

This time, though, Bryant (15 of 31 from the field) wasn’t the only Lakers player to exploit the Cavaliers. Pau Gasol scored 19 points and pulled down 10 rebounds.