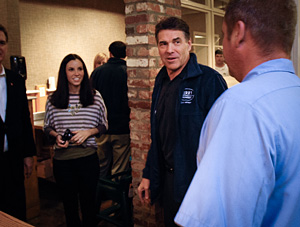 BLYTHEWOOD, S.C. — Speaking to about 30 people at a restaurant north of Columbia, Texas Gov. Rick Perry left out his “vulture capitalist” attack on Mitt Romney’s work with Bain Capital. But in an interview with Fox News that came afterward and played on the restaurant’s big-screen TVs, he repeatedly defended his criticism.

Perry insisted that he was not taking on all venture capitalists, but was specifically assailing Bain Capital, the firm that the former Massachusetts governor co-founded.

“We’re trying to lure more venture capitalists into my home state every day,” the Texas governor said, “but the idea that you get private equity companies to come in and, you know, take companies apart so they can make quick profits and then people lose their jobs, I don’t think that’s what America’s looking for. I hope that’s not what the Republican Party’s about.”

When the network’s Martha MacCallum asked Perry whether he believed this argument was working in the state that holds the next GOP presidential primary, he said: “If you go to Gaffney, S.C., or Georgetown, S.C., a couple of cities where Bain Capital did come in and destruct those companies and people lost their jobs, I will tell you it’s still a real sensitive issue in those places.”

And he parried the suggestion that his battering could hurt the party’s chances to win in the fall, a contention that would only be true if Romney, who leads in the polls in South Carolina and nationally, becomes the nominee.

“It’s not a matter of doing the party any good,” he said. “It’s about vetting a candidate. I didn’t hear anybody questioning when they were attacking me for the things that I’ve done. I will tell you that when people can point to where you made a quick profit and kicked people out of their jobs, that is an issue that’s got to be addressed.”

The interview, in a backroom of the Lizard’s Thicket, which features Southern specialties, came after Perry offered a version of his stump speech and then worked the entire restaurant.

And he promised to seal up the nation’s border with Mexico with fencing, troops and drones. “I will promise you, a year from the time my hand comes off that Bible and I’m the president of the United States, that border will be shut down and it will be secure,” he said to enthusiastic applause.

At this stop, he stressed his military background and support from decorated South Carolina veterans. He noted that his father was a B-17 tailgunner in World War II and that he was a pilot in the Air Force. “I kind of went from a very pedestrian speed, if you will, to Mach 1.2 kind of overnight,” he said.

He said after he finished fifth in the Iowa caucuses and was reassessing his campaign, a grievously wounded veteran urged him not to quit. “One of the reasons that we’re here in South Carolina is because we don’t quit. We’ve got the heart of a warrior,” he said.

Perry stopped by almost every table. He talked to Jennifer Rush, a 30-year-old mother there with her two children, and he advised 4-year-old Gabriel, “OK, get after those grits, now.”

Rush saw Rick Santorum the day before and planned to catch Newt Gingrich later in the day. “Those are our three options. Anything not Romney,” she said, describing the front-runner as too moderate.

The candidate spotted a patron wearing a Purple Heart cap and when he introduced himself as Linwood Mizell, Perry quipped, “That’s a mouthful.”

The 61-year-old veteran, who was wounded in Vietnam as an infantryman, said he had not decided how he would vote. “I’m still listening,” he said.

But he noted that he wasn’t liking a lot of what he was hearing on his TV set. “I want whoever’s running to tell me what he’s running for,” he said.