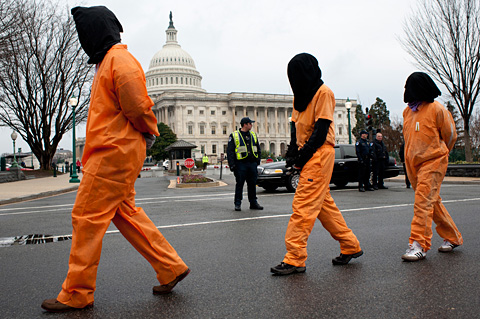 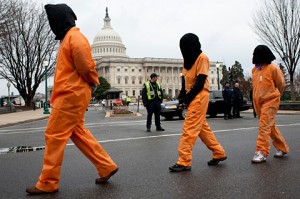 MIAMI — Guantanamo captives hung protest signs inside their cellblocks in Cuba on Wednesday while opponents of the 10-year-old prison camps donned orange jumpsuits and marched in solidarity around the globe.

(PHOTO: Protestors pass in front of the U.S. Capitol during a rally in Washington, D.C., to demand on Wednesday, January 11, 2012, that President Obama keep his promise and shut down the U.S.-controlled detention center at Guantanamo Bay, Cuba. The protest marks 10 years since the first detainees were transferred to Guantanamo.)

Lawyers for the captives disclosed plans for the coordinated protest, which prison camps spokeswoman Navy Cmdr. Tamsen Reese then confirmed was under way. Some captives were refusing to eat their meals, she said. Others were doing a peaceful sit-in at a recreation area inside a communal POW-style camp for cooperative captives.

Reese said the Pentagon chose not to disclose the messages on the signs.

Nor would they release photos from the U.S. prison outpost in southeast Cuba where a decade earlier a Navy petty officer snapped images of the first 20 captives to arrive, in shackles and on their knees at Camp X-Ray.

In Washington, D.C., human rights activists reenacted the scene — some from inside a cage, wearing the iconic orange jumpsuits — while others marched past the White House, U.S. Congress and Supreme Court.

At 1600 Pennsylvania Ave., one protester held a classic Barack Obama campaign poster declaring HOPE, along with the slogan “You don’t get indefinitely detained.”

And in South Florida, a knot of seven protesters held signs and greeted military workers bound for the Pentagon’s Southern Command in Doral rush-hour traffic with a message Wednesday morning: Close Guantanamo.

“Most people are indifferent,” observed veteran protester Ray del Papa, 58, who has been turning up at the Southcom protest each year since they began in 2004.

Motorists, some wearing U.S. Army uniforms, found themselves stopped by a traffic signal alongside del Papa, who had donned a lightweight, bright orange jumpsuit provided by Amnesty International for the occasion.

Del Papa said he took a half-day off to participate in the protest because, “I think it’s important. We have to think of the world we leave behind. How many people fought for civil rights and never saw a black president of the United States?”

At Guantanamo, the military said that some captives, all foreign men from 23 nations, had notified their guards of plans for a coordinated, three-day peaceful protest of sit-ins in open-air camp recreation yards for compliant prisoners and refusal to eat for three days, Tuesday, Wednesday and Thursday.

Elsewhere protesters donned orange attire, black hoods and shackles in demonstrations outside U.S. embassies in Berlin, Madrid, Ottawa and Kuwait City, the U.N. offices in Sudan’s capital Khartoum, and on the steps of the federal building in Los Angeles.