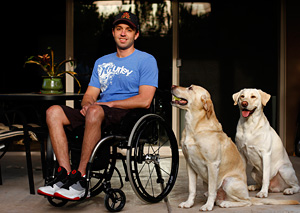 CHICAGO — Dr. Richard Fessler leaned over his patient’s back and sliced through skin, muscle and bone until he exposed the man’s spinal cord, crushed just days earlier in a motorcycle crash.

(PHOTO: Ryan Neslund, who was paralyzed in a motocross accident, participated in a clinical trial of using human embryonic stem cells for therapy that was canceled unexpectedly. He is shown on December 11, 2011, in Scottsdale, Arizona.)

He then inserted a syringe into the cable of nerves and injected about 1 million cells grown from an embryo donated more than a decade earlier at a Wisconsin fertility clinic.

The procedure, performed at Northwestern Memorial Hospital last spring, was a monumental event, part of the world’s first test in humans of a therapy derived from human embryonic stem cells.

But several months later, after four patients had received the transplants, Fessler opened an email from his office informing him that the trial was finished.

Geron Corp., the California-based company financing the study, had decided to shift focus to cancer drugs, and with that move, another foray into stem cell therapies had come to a jarring end.

“It is both disturbing and annoying and atypical when compared to other areas of research,” said Fessler, lead clinical investigator of Geron’s trial and a professor of neurosurgery at Northwestern University. “The world of stem cell research is extremely controversial and in certain areas it is extremely expensive, and when you put those two areas together it is hard to keep studies going.”

For more than a decade, stem cell research has been at the center of fantastical speculation, rife with talk of lab-raised livers and beating hearts, of insulin-secreting pancreatic cells and of homegrown neurons for Parkinson’s patients, cultured in a petri dish.

But moving from petri dish to human has proven problematic. Scientists have grappled with an array of reoccurring obstacles, including political interference, sporadic financing and the difficulty of working with the mercurial cells.

Geron’s seeming ability to scale those hurdles made its abandonment of the program all the more chilling for a scientific community well aware of the damaging effects of false starts, especially on funding.

“These guys were pioneers and the first pioneers are always taking the most risk,” said Dr. George Daley, a leading stem cell researcher and director of the stem cell transplantation program at Children’s Hospital in Boston. “But it casts a pall over a whole area where it has been hard to sustain momentum because of controversy and lack of funding.”

The crux of Geron’s venture was bold: take stem cells and inject those into patients with spinal cord injuries in the hopes of restoring mobility by repairing the myelin sheath, the thin, white coating that protects nerve fibers.

In a video presentation to analysts and investors, Geron showed rats with spinal cord injuries that could barely move. Within weeks after they were injected with the stem cell-derived drug known as GRNOPC1, the rodents were seen scurrying around their cages, back legs and tails no longer dragging.

Despite rumblings in the scientific community that it was still overly ambitious, Geron finally won approval in 2009 to begin injecting the drug into humans.

“There is always (this) debate,” Fessler said. “The basic scientists never feel like you have enough information and the clinical scientists feel that at some point you’ve got to try it in a clinical trial because you learn so many more questions that you have to answer.”

Several months later, on April 23, 2011, Ryan Neslund hopped into his car and drove to a local Minnesota motocross track for his daily motorcycle ride. It had just rained and the path was scored with ridges of mud.

Neslund, 32, whizzed around the track, but on the fifth loop lost control in a rut, catapulting off the bike and landing hard on his tailbone.

“I touched my stomach and my legs and it didn’t feel like it was a part of me,” said Neslund during a recent interview. “It felt like my body was dead.”

Paramedics airlifted Neslund to a hospital near Minneapolis where he underwent emergency surgery. When he awoke, Neslund said his doctor told him he had crushed two vertebrae and would never walk again.

But Neslund said he refused to accept the grim prognosis and began scouring the Internet for unconventional therapies.

Eventually he called a friend who works as a nurse in Chicago, who told him about a stem cell trial that involved Northwestern. The next day Neslund’s cousin drove him to Chicago.

The following few days were a blur of tests to see if Neslund would qualify. When the results came back positive, Neslund said he was required to speak to an outside consultant who told him that the risks of enrolling in the trial included cancer and death.

“I just signed the papers. I said, ‘Whatever the dangers are, I don’t care. I just want to do something rather than nothing,’ ” Neslund said.

Fourteen days after the accident, Fessler reopened Neslund’s spinal column and injected the cells. Months of therapy and close monitoring at the Rehabilitation Institute of Chicago followed.

Although doctors have used adult stem cells for decades in bone marrow transplants for cancer patients, embryonic stem cells are considered more versatile, but that versatility can also be a problem. If the cells are not developed to a certain point, they can form tumors. That concern and worry over other possible complications was the primary focus of Geron’s trial, designed to evaluate safety.

Neslund’s tests showed no sign of danger, however, and he was allowed to leave Chicago with plans for future check-ups.

Last November, when he saw the Chicago area code flash across his cellphone, Neslund thought it was Fessler calling to update him on his latest examinations. He had recently begun to feel faint digestive sensations and wondered whether the procedure had begun to work, though doctors had told him it might take up to two years to see results.

Instead, Fessler told Neslund that Geron had canceled its stem cell pursuits after determining it was financially riskier than focusing on its two cancer drugs. In an announcement at the time, the company disclosed that funds were low and that it would be eliminating almost 40 percent of its workforce.

Although Geron said it would continue for the next 15 years to monitor Neslund and the other patients who had received the transplants, no one else would be enrolled.

“I was worried,” said Neslund, who now lives in Arizona. “You have these things shot in your back and then they tell you that they ran out of money. It just doesn’t seem right to me.”

Others questioned whether Geron had set an unrealistic goal for medicine’s first embryonic stem cell therapy. Fessler’s colleague, Dr. John Kessler, said that his own lab’s inability to reproduce Geron’s rat study results left him skeptical that the trial was worth the risk.

“I felt that the Geron trial was the wrong trial at the wrong time,” said Kessler, who heads Northwestern’s Stem Cell Institute and is the chairman of the university’s Department of Neurology. “Science is like building a building, brick by brick, and you can’t build the 10th floor until you build the first.”

Despite Neslund’s apprehension and disappointment in how the study ended, he said he’s glad he participated because he hopes the drug will eventually do something positive. But so far, no measurable benefits or problems have been linked to the cells, said Fessler, who will continue to treat Neslund.

“(The trial) was worth it for a number of reasons,” said Fessler, pointing out that scientists learned a lot about how to purify, store and administer the stem cell-derived drug. “It keeps us thinking about (paralysis) and trying to figure out ways to treat it effectively and it advances our knowledge of stem cell biology.”

One is using human embryonic stem cells to try and treat eye diseases such as age-related macular degeneration. Another company is reporting promising early results in its transplanting of different kinds of stem cells to help patients with Lou Gehrig’s disease. That company also has an application pending with the FDA to launch another stem cell trial involving spinal cord injuries.

“In science eventually we find out the answers, at least sometimes,” Fessler said. “But someone’s got to do the original work.”