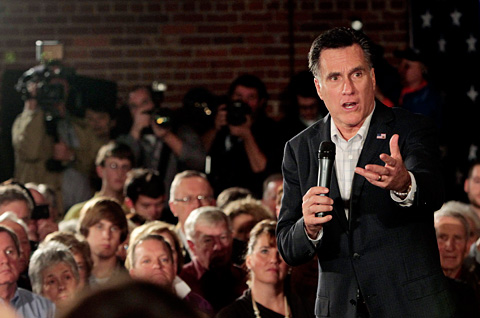 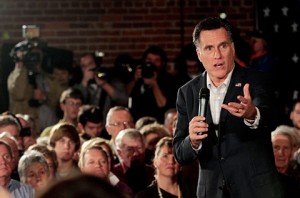 COLUMBIA, S.C. — The Republican presidential sweepstakes shifted Wednesday to South Carolina, where former Massachusetts Gov. Mitt Romney hopes to keep running the table of contests while his rivals try desperately to halt his momentum toward the GOP nomination.

Gingrich launched a not-so-thinly-veiled attack on Romney in Rock Hill. Without mentioning him by name, Gingrich dismissed the GOP front-runner as a “Massachusetts moderate.” He also attacked Romney’s record with Bain Capital, the private-equity firm that Romney co-founded. The firm profited by investing in troubled companies, turning some into successes while others failed. Often jobs were shed in the restructuring process — which Gingrich and Perry are attacking as evidence of Romney’s cold-hearted capitalism.

A super-PAC backing Gingrich plans to spend $3.4 million in South Carolina airing a documentary that rips Romney as “more ruthless than Wall Street.”

Romney has said that attacking his record at Bain “put free enterprise on trial.” But Gingrich insisted to a standing-room-only crowd at Rock Hill’s Laurel Creek Club that Romney’s time at Bain is fair game.

“Criticizing specific actions in specific places is not being anti-free enterprise,” he said. “And raising questions about that is not wrong.”

Perry, who finished last in the six-man field in New Hampshire, also took shots at Romney for his work at Bain.

The attacks on Romney will likely grow louder in the run-up to the Jan. 21 primary. South Carolina is perhaps the last best chance for Perry, Gingrich or Santorum to upset Romney, or to at least slow his momentum.

But the three GOP candidates are courting the same pool of voters — the 60 percent of likely Republican voters who are self-described Christian evangelicals. That bloc could be cool to Romney, a Mormon. About 150 evangelical leaders, wary of a Romney nomination, are scheduled to meet Friday in Texas to consider uniting behind a single alternative to Romney.

After barely edging out Santorum in Iowa last week and crushing the entire Republican field in New Hampshire on Tuesday, Romney leads polls in South Carolina. Given the state’s conservative culture and its reputation for bare-knuckle politics, Romney knows he’s no shoo-in.

“I’ve got an uphill climb in South Carolina ahead of me,” he told NBC’s “Today” show Wednesday.

Romney hopes to stay above the fray through a three-pronged strategy: Concentrate his fire against President Barack Obama, use surrogates to attack Republican rivals, and try not to demolish those rivals so that they’ll stay strong enough to split the anti-Romney vote.

Romney has reacted mildly so far to his GOP rivals’ attacks, saying, “I think it’s something we expected to come from President Obama. We didn’t expect that Newt Gingrich and Rick Perry would become the witnesses for his prosecution, if you will.”

He’ll leave it to surrogates to serve up the rhetorical red meat. His roster includes South Carolina Gov. Nikki Haley and Sen. John McCain, R-Ariz., who is popular with the state’s large military community.

“The entire Republican world is fighting back for us,” said Romney adviser Ron Kaufman. Many establishment Republicans have bemoaned the GOP attacks on Romney’s business record as undermining the party’s fundamental support for free enterprise.

In his acceptance speech Tuesday night, Romney unveiled a new, sharper line of attack on Obama. Expect to see more of that, advisers said.

“This is the right time to pivot to the issues he’s serious about,” Kaufman said. “America is watching now.”

If anti-Romney voters don’t coalesce around a single candidate and Romney can stay on message, he could be tough to beat in South Carolina.