Rainbow Trout for 2013 Are Being Spawned Now in Iowa 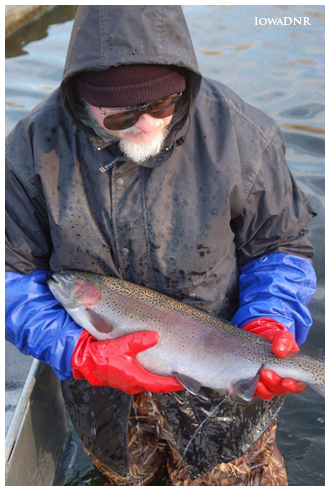 Sliding the last tray into the shelves along a wall, Tom Rohde could look down at a morning’s work; 100,000 future trout—give or take a few thousand—now beginning the hatching process inside the Manchester trout hatchery.

Eventually, you may be facing them in a northeast Iowa stream or one of 16 urban fisheries across Iowa.It starts with Department of Natural Resources fisheries technicians Rohde and Randy Mack waist deep in an outdoor raceway.  Chest waders, rain gear and elbow high gloves keep them dry as they herd big brood fish to the end of the concrete raceway with a mesh gate, selecting ‘ripe’ females—ready to spawn—for a short trip inside. “Today, we are spawning rainbow trout. The female brood fish average six to eight pounds each. Each will produce about 6,000 eggs,” explained Rohde.  “It takes 30 days or so for these eggs to hatch, so the eggs we spawn today are actually for the 2013 stocking program.”

He and Mack move from tank to tabletop to trays, as the constant splashing of water from Spring Branch creek tumbles across hatching trays, holding tanks and an array of raceways for tiny trout. The hatchery was built here nearly a century ago because of the quality—and quantity—of cold water coming from springs and the limestone bluffs.After a quick sedative bath to quiet them, each big trout is held firmly over a plastic bowl, as one of the workers rolls a hand down her belly to force out a stream of orange-golden eggs. Mixed in quickly is the milk-white sperm from two males. A saline solution is added to aid fertilization. The last step?  A turkey wing feather; firm enough to stir the concoctions for 30-40 seconds, but soft enough to avoid bruising the eggs.

Then fertilized, the eggs are poured into the rigid plastic trays and slid into their place below a stream of 50 to 52 degree water. An RB for ‘rainbow’ and the days date are written on the outside…and it’s a matter of monitoring them until they hatch.

You still won’t see them until next year. That’s how far ahead the hatchery works. That extra attention, labor and hatchery space is why anglers hand over an extra $12.50 for trout fishing privileges each year.  About 80 percent of the half pound or so ‘catchable size’ fish stocked are rainbows. They’re easier to grow and popular with the trout fishing crowd. The other 20 percent are native strain brook trout. About 200,000 brown trout fingerlings are also stocked, to grow up in the streams; wilder and more of a challenge to bring to net.

The brooks are spawned in October; the browns in November. The rainbows—the backbone of Iowa’s trout program—take up much of December and January. This time of year, those fish of the future range from full sized and splashing in the outside raceways to the tiny, shiny, orange globes along the hatching tray wall. At two to three inches, many head out from Manchester—the state’s only trout hatchery–to rearing stations at Decorah and near Elkader. Eventually, each facility stocks streams in its area from April through October.

For years, it also meant stocking small lakes near Dubuque, Mason City and Waterloo-Cedar Falls. Those plants came through the winter, to spread the fish around and maybe stir up some urban interest. That ‘urban fishery’ program now serves 16 communities; most stocked twice a season.

Once in awhile, a culled brood fish or two gets mixed into the day’s stocking allotment. New ones are coming up, and it never hurts to see the look on an angler’s face as one of those hogs plops into the water with all those half-pounders.

And—if you are watching for one—Mack weighed the biggest brood female; 14 and a half pounds; coming to a stream—or lake—near you.  Someday.