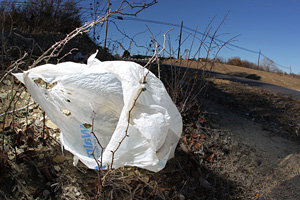 FORT WORTH, Texas — There’s a new tumbleweed in town.

The old-fashioned tumbleweeds that long exemplified empty, desolate places have been replaced by a new symbol of blight: urban tumbleweeds — lightweight plastic bags that get snagged in trees and bushes, pile up in streets, clog drainage systems and endanger wildlife.

(PHOTO: Stray plastic bags blowing across the landscape are a familiar sight with billions of the bags estimated to be used every year. Some cities are outlawing their use or charging customers extra to use them to encourage use of reusable bags.)

A growing number of world leaders consider the bags an environmental hazard and are taking action to eliminate them.

Seattle, Portland, Ore., and several California cities are among the latest cities to ban the bags, following more than two dozen others that paved the way since 2007.

Austin is poised to vote to become the biggest Texas city with a ban. Brownsville enacted the state’s first last year.

“We got along without plastic bags for a very long time,” Austin Mayor Lee Leffingwell has said, adding that he realizes that many people like the bags and properly use them. “I can actually remember a time in my lifetime when we didn’t have plastic bags at all.

North Texas cities aren’t jumping on the bandwagon. But several, including Fort Worth, say they are monitoring what other cities do and won’t rule out taking action later.

Fort Worth Mayor Betsy Price wishes that such a ban weren’t needed at all.

“Texas used to have the ‘Don’t Mess With Texas’ campaign,” said Price, who has seen plastic bags, foam containers and other trash littering various parts of the city. “Everybody has to take a little responsibility for their community.

“We can’t regulate everything.”

Plastic bags, traditionally made from polyethylene, have been provided in grocery and convenience stores and restaurants worldwide for several decades. They began edging out paper bags in popularity soon after being introduced.

Annually, an estimated 500 billion to 1 trillion such bags are used worldwide.

Some environmentalists say that, despite recycling efforts, millions of bags end up in the environment, where they take decades or centuries to decompose.

But supporters argue that the bags are useful, can be reused, offer shoppers more convenience, take up less space in landfills than their paper counterparts and provide countless manufacturing jobs.

In 2007, San Francisco was the first U.S. city to ban plastic bags, and it has been followed by several other cities in California, as well as Edmonds, Wash., Westport, Conn., Portland and Seattle. Several Texas cities, including South Padre Island and Fort Stockton, followed Brownsville’s lead, and more may soon follow.

The United Nations Environment Program called for a worldwide ban on plastic bags in 2009, and more than nine countries have done so, including South Africa, Somalia, Bangladesh, France and China. Shoppers in nations including Denmark, Germany, Israel and Ireland must pay taxes on the bags or pay for the bags themselves.

Some say removing the bags from grocery stores will keep the bags out of the environment, where they become litter and where animals can mistake them for food.

Many of the bags may take 1,000 years to decompose on land and 450 years in water, according to the California-based Earth Resource Foundation, which has launched a campaign against them.

Those in the industry say they encourage the reuse of bags and provide recycling opportunities such as bag collection containers at many grocery stores. They say the bags are convenient and more sanitary than cloth bags, which are rarely washed and can carry bacteria. And they say the facilities that make them, including some in North Texas, employ hundreds nationwide.

The Texas Retailers Association has come out against Austin’s proposed ban, calling it “an oppressive and unnecessary burden on consumers.”