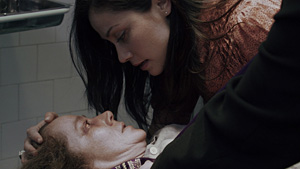 LOS ANGELES — “The Devil Inside” was a surprise hit at the box office this weekend — a micro-budget horror film with no stars and plenty of bad reviews, the film came out of nowhere to gross $33.7 million and become the third-highest January opening in Hollywood history.

But far from a novelty, “Devil Inside” is the first in a new wave of films based on the premise of “found footage” — movies blending fantastical plots with supposedly real video events — due for release this year. A found-footage high school comedy is on its way. So is a superhero tale, and more horror films.

In a time when expensive, effects-driven movies rule the roost, this inexpensive form of pseudo-verite appeals to Hollywood and, potentially, filmgoers.

“There’s a freshness to it — the camera work gives you an intimacy, because you feel like you’re inside something that is real,” said Lorenzo di Bonaventura, the executive producer of “The Devil Inside.” “(And) these films are so wildly profitable — and even when they’re not, the cost of them is so little that it’s an easier shot to take.”

The found-footage trend began in 1999 with the creepy walk-in-the-woods story “The Blair Witch Project,” and evolved with 2008’s monster movie “Cloverfield.” The success of that film helped pave the way for “Paranormal Activity” the following year. A haunted-house movie that cost just $15,000 to make, the 2009 film turned into a cultural phenomenon, taking in $108 million and spawning two sequels to date. A fourth “Paranormal” film is due out next Halloween.

Those movies helped create a genre characterized by grainy video, a sense of voyeurism and the tantalizing (though of course, incorrect) possibility that the events on screen might actually have taken place.

“There’s always a side of us that wants to believe we really are in that bedroom or in that situation with the characters,” said Amir Malin, former CEO of Artisan Entertainment, which released “Blair Witch.”

On Feb. 2, 20th Century Fox will look to continue the “Devil” mojo with “Chronicle,” about a group of twentysomethings who use their newly discovered superpowers to dangerous ends. A month later comes “Project X,” a Warner Bros. picture about teens throwing a wild party that’s interspersed with one character’s video diary of the night. (Shot for about $12 million, it has “The Hangover” director Todd Phillips as a producer.)

And in August filmgoers will get a double dose of low-budget verite with “Sinister,” a haunted-house story about a true-crime novelist that will be released by “Twilight” studio Summit Entertainment, and “7500,” a supernatural thriller set aboard an airplane that is being released by CBS Films. Although neither film is strictly found footage, they both employ certain conventions from the genre to create a sense of realism.

These films tap into the same aspect of entertainment that draws viewers to shows like “The Bachelor” and “Jersey Shore.”

“A lot of these movies are comparable to reality television,” said Steven Schneider, executive producer of “Devil.” “It’s born of our desire to have genre narratives that still seem very grounded and real.”

The found-footage conceit also is a natural for a generation that has grown up holding cameras themselves, making video diaries and other forms of amateur entertainment.

“I think people enjoy intimacy more now, because they’re watching things online and movies like this give them the sense that they could shoot something like this too,” said Nima Nourizadeh, 34, who was hired to direct “Project X,” his first feature film, after shooting an Adidas commercial documentary-style.

“Devil” cost less than $1 million for its unknown director, William Brent Bell, to make. Paramount marketed it extensively, using a clever Twitter campaign and buying pervasive outdoor and television ads featuring, among other things, a haunting shot of a nun with spooky eyes.

“When a movie costs a million dollars, you can afford to take chances with the marketing campaign,” said Megan Colligan, Paramount’s president of domestic marketing and distribution.

Indeed, what’s perhaps most striking is how much studios are willing to spend on movies that cost so little. While movie companies’ budgets for both production and marketing in recent years have grown in lock step — it’s now common for studios to spend as much as $150 million to $200 million on a summer tent pole and almost as much to market it — many are discovering that if they can limit production costs, they have more money to bring out the film.

“I believe we’re at the dawn of the low-budget wide release movie,” said Jason Blum, who produces the “Paranormal Activity” franchise and is also a producer on “Sinister.”

But whether audiences will soon tire of a filmmaking style that at the moment seems fresh remains to be seen. Moviegoers were turned off after they saw “Devil,” giving the exorcism tale an execrable “F” on CinemaScore. And this past summer, found-footage film “Apollo 18,” about the mythic aborted NASA mission, flopped, taking in fewer than $18 million domestically and suggesting that audiences might not always want to see pretend-reality on a movie screen.