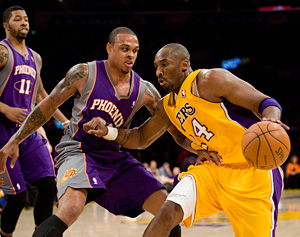 LOS ANGELES — The Los Angeles Lakers were scattered everywhere Tuesday: one player too nauseated to play, another celebrating the birth of twin daughters, yet another still fighting a turf-toe injury.

But Kobe Bryant suited up.

(PHOTO: The Los Angeles Lakers’ Kobe Bryant (24) drives against the Phoenix Suns’ Shannon Brown during the first half at the Staples Center in Los Angeles, California, on Tuesday, January 10, 2012.)

He turned back the clock with 48 points Tuesday, looking as spry as ever in the Lakers’ 99-83 victory over the Phoenix Suns at Staples Center.

Bryant recognized the Lakers’ needs, making 18 of 31 shots and 12 of 13 from the free throw line for the biggest scoring outburst of any NBA player this season. It was the 108th 40-point game of Bryant’s career, his first this season after only three last season.

In fact, it was his highest output since scoring 49 against Phoenix on March 1, 2009.

He was a study in near-symmetry, scoring 17 points in the first quarter and, of greater importance, 16 in the final quarter as the Lakers (7-4) turned a one-point lead early in the quarter into a three-game winning streak.

There were other players on the court — Pau Gasol collecting 16 points and 12 rebounds, and Andrew Bynum scoring 12 points — but the story was Bryant, as it often had been through the years.

For those with short memories, he’s doing it with a torn ligament in his right wrist that normally requires surgery, followed by months of rest and rehabilitation.

“You have to figure out a way to get it done,” Bryant said. “There’s no time to make excuses. If I play bad or have one bad game like I did in Denver, everybody cries for a change or cries for the fact that I’m too old when it’s just a bad game or a bad wrist.

“Nobody wants to hear that, so I make adjustments and go from there.”

Derek Fisher, Bryant’s teammate for so many years, provided perspective outside of Bryant.

Despite the wrist injury, Bryant seems like a different player since going to Germany twice during the off-season for minor but innovative procedures on his historically bothersome right knee and left ankle.

“Last season, he wasn’t healthy,” Fisher said. “So as great as he is, it’s tough to be even close to as good as he can when you’re banged up as bad as he was.

“If it wasn’t for the wrist, I think you’d have seen much more of (Tuesday’s outburst) in these first 10 games. He’s continuing to find ways to adjust his game to still be effective and do what we need him to do in order for us to win.”

He was definitely effective Tuesday, taking a 75-74 Lakers lead with 8:54 to play and turning it into a laugher.

He beat Grant Hill off the dribble for a dunk. He scored on a reverse dunk off Matt Barnes’ alley-oop pass. He made a variety of bank shots, fade-aways and straight-away jumpers.

The Lakers needed him. They were a skeleton crew from the start.

Troy Murphy was sidelined by intestinal flu-like symptoms, Josh McRoberts remained out because of a sprained big toe on his left foot, and Jason Kapono was given the night off because his wife, Ashley, gave birth to twin daughters, Isla and Campbell.

All the absent forwards meant more time for Luke Walton, who had six points and eight rebounds in 26 minutes, all season highs for him.

Bryant was solid from the start, making eight of 11 shots as the Lakers overcame a 19-10 deficit by scoring the last 15 points of the first quarter.

The Suns had a chance after three quarters but didn’t have much punch beyond Shannon Brown, who scored nine of his 11 points in the final quarter of his first game against his former team.

The night belonged to Bryant, not Brown.