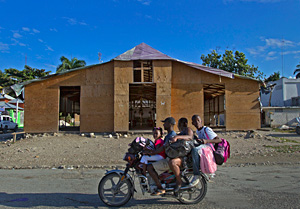 PORT-AU-PRINCE, Haiti —In public squares where dirty, overcrowded tents once housed thousands of homeless quake victims, children now ride bikes and kick soccer balls in the open space. Roads previously barricaded by rubble are clogged with traffic. A downtown nursing school and a hilltop hotel that collapsed are under reconstruction.

(PHOTO: A wooden church pieced together replaces the St. Rose de Lima church in Leogane, Haiti, January 4, 2012. Two years after Haiti’s most horrifying 35 seconds, seeds of progress are evident across this battered nation where a devastating earthquake left 300,000 dead and some 1.5 million homeless in its capital and surrounding cities.)

Two years after Haiti’s most horrifying 35 seconds, seeds of progress are evident across this battered nation where a devastating earthquake left 300,000 dead and some 1.5 million homeless in its capital and surrounding cities.

But with more than a half-million people still living in squalid camps, and billions of dollars in promised aid still to arrive, much remains to be done for the changes to take root. And some Haiti experts and Haitians worry that the country could still slide backwards without major efforts to create jobs and economic reforms.

“After two years, what can I say? We’re still here,” said Yvrose Mongerard, who lives in Corail-Cesselesse, a post-quake planned community north of the capital where tens of thousands of people have since set up makeshift camps. “We are not asking for a handout, but if we were working, we would be able to help ourselves. We are not doing anything here, just looking.”

Faius Adonis, 56, who lives in a tarp-covered shack with his wife and five children in the southern city of Leogane, agreed that times remain brutally tough, regardless of the reconstruction that is occurring.

“Hard times are killing us,” he said. “The tarp doesn’t do anything. Two years after the quake, we’re still in the streets.”

Even as some worry about the slow progress, the country’s new president points to positive steps.

There is no doubt that lives have been saved with the outpouring of billions of dollars — both through private charitable organizations and the myriad international aid groups that rushed to Haiti in the days and weeks after the 7.0-magnitude quake. But the slow pace of recovery, disorganized, donor-driven projects, scattered development and lack of investments in creating jobs have many questioning whether the money was smartly spent.

The quake offered an opportunity for Haiti to pull itself out of the economic and political morass that has existed for decades. But even that possibility was quickly beset with problems.

Lack of decision-making in the early days after the devastation, nongovernmental organizations that wanted to chart their own course for recovery and an international community with its own spending priorities all hampered Haiti from the start of the recovery. Add to that a cholera epidemic, a political crisis and months of no government at all and Haitians began to feel grateful simply to get the rubble cleared from the streets.

“Humanitarian work is not always visible. It’s about giving food and saving lives,” said Emmanuelle Schneider, spokeswoman for the U.N. Office for the Coordination of Humanitarian Affairs in Haiti. “It’s not about building cathedrals. … You might not see it, but a lot has been done.”

In the past 24 months, new communities have sprouted. Tattered tents have been replaced by 100,604 temporary shelters — some no larger than a backyard shed. Hundreds of schools have been repaired, some new ones built, and the rubble that could once fill five Superdomes, has been reduced by half, recycled into construction and road material.

In recent weeks, thousands of quake victims have been relocated from tent cities with the help of a one-time $500 cash payout, financed by the U.S. Agency for International Development, to pay a year’s rent. It came on the heels of forced evictions, and rapidly deteriorating conditions in camps where free services, including water, are quickly disappearing.

“We had 1.5 million people in the streets. … 66 percent of those people have left the camps,” said Luca Dall’Oglio, the head of the International Organization for Migration in Haiti, which has been relocating tent dwellers into homes.

The aid group is coordinating a government-launched housing initiative aimed at shutting down at least six camps and returning people to 16 rehabilitated neighborhoods.

But Dall’Oglio concedes that while in theory, the progress could be viewed as a “great achievement,” in practice everyone needs to be cautious.

“They are not all back home,” he said of the displaced. “Many of these people are back in houses that probably should be demolished, or sharing space in very precarious situations.”

For Johnny Fleurentin, 29, the joy of finally moving out of the camp at Place Boyer, a public plaza in the hills above the capital in Petionville, is tempered by the reality that a year from now he could once more be homeless.

“Every year around this time, we’ll have to find the rent money,” he said, just days before Christmas as he dismantled a friend’s tent in the Petionville square. “And you could very well not manage to come up with the money.”

Days earlier, Fleurentin also found a place to live, a $325-a-year dwelling. After a caseworker approved the location, both he and his landlord were given bank PINs to tap into the $500 allocation. The landlord got his $325, with Fleurentin receiving the remaining $175.

“What can I do with that? I had nothing. I had to buy some clothes, and as soon as you get that money, friends invade you,” he said. “If you come see my house, all you’ll see is a little carpet with a little mattress.”

Petionville Mayor Claire Lydie Parent, who first piloted the program before it was taken over by the Martelly government, said the empty public plazas are a beautiful site. Recently, her office put a fence around Place St. Pierre, which became an eyesore after residents rushed to the hills from downtown fearing a tsunami after the disaster.

But home for many in this country of shanties and slums doesn’t necessarily mean a house, a reality not lost on aid experts.

A report issued by the Interim Haiti Recovery Commission shortly after its 18-month mandate expired described the effort to address the recovery of neighborhoods and the more than 70,000 houses destroyed and 90,000 damaged in the quake as “a slow and challenging process.”

“Housing reconstruction is the most visible indicator — both to the affected society, and to those outside who help fund reconstruction — of whether progress is being made with reconstruction,” the report said. “Internationally, the camps have become an enduring symbol of how the earthquake affected Haitians, and until this symbol disappears, it will be used to judge whether reconstruction is really happening.”

But getting rid of the tents is not easy.

“For (the tents) to be gone, a lot has to happen on the government side. A lot of projects, a lot of money,” said Philippe Verstraeten, head of OCHA in Haiti.

The housing challenges are evident throughout quake-affected communities.

In Zorange, not far from the Port-au-Prince international airport, 380 houses are currently under construction by a government agency. The two-room, pastel-colored homes come with a tiny bathroom, porch and cooking area. The Inter-American Development Bank is providing $7.5 million, while South Florida-based Food for the Poor contributed about 140 at a cost of $3,200 per unit, according to the IDB.

Up the street, across from a Wi-Fi-equipped post-quake Nouvelle Zorange school that began in tents, dozens of houses built by the Venezuelan government are being occupied by Haitian squatters who say they grew tired of waiting for the government to decide how they should be distributed.

And in Leogane, a devastated coastal community 18 miles south of the capital that was the epicenter of the quake, life is slowly returning to a semblance of normal. Habitat for Humanity is building one-room permanent houses, while damaged homes have been repaired. Tents are increasingly hard to find. Even so, the supply of decent housing remains inadequate, say residents living in shanties made of corroded aluminum sheeting.

Twelve miles north of the capital in Corail-Cesselesse, 2,107 transitional shelters now line a sun-soaked, rocky plain, once billed as a place for quake victims to begin to rebuild their lives as they await the birth of a new city with factory jobs and services. The factories never came, but thousands of illegal shacks did — now dotting the barren mountains surrounding the camp. The once flimsy tents have been replaced by shelters that were supposed to be temporary but are quickly taking on an air of permanence.

With all of the NGOs having left Corail, there is a growing sense of despair.

“If we were to find work, it would be a good thing,” said Norcius Lenord, who saved his family but lost his job when the business he worked for collapsed in the devastation. “All we have out here is sun and rocks.”

Sam Worthington, the head of InterAction, a coalition of U.S.-based humanitarian aid groups with members working in Haiti, said it would take more than the $5.3 billion pledged by the international community, or the $1.36 billion given by the American public to return a poverty-stricken Haiti to its pre-quake state, much less build it back better.

“Did we solve poverty in Haiti? The answer is ‘No.’ No amount of aid can solve it,” he said.

An engaged and effective Haitian government will, he said.

With the fate of the Interim Haiti Recovery Commission on hold — the government would like to extend it, but parliament is divided — Prime Minister Garry Conille recently created a unit in his office for the reconstruction of public infrastructure and housing to expedite the process. Among the priorities are not just how to provide adequate, safe housing for those without jobs but what to do about public buildings — almost all of which were destroyed.

“For the first time, we could have real projects with real money behind them,” Conille said.

These projects include a new $52 million State University Hospital, financed by France and the United States; another hospital in the Cite Soleil slum and a new permanent parliament building. The main airport is currently undergoing a $5 million facelift.

But there are risks that compassion fatigue and donors’ own financial woes at home could cause them to reduce their commitment to Haiti.