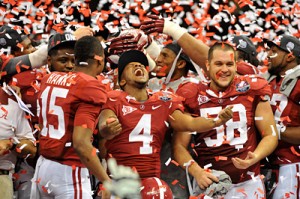 NEW ORLEANS — In the end, Alabama was the better team.

Maybe not all season, and not on that early November evening in Tuscaloosa when LSU prevailed.

But on the biggest stage, in the most important game, the Crimson Tide not only were better, they were much better in a 21-0 victory.

“The question before the game was, ‘How bad do you want to finish?’ ” Alabama Coach Nick Saban said.

Now, the question is, are the Crimson Tide No. 1?

They are in the Bowl Championship Series. Alabama, 12-1, will take its second crystal ball trophy back to Tuscaloosa, although there was little drama and nothing offensively aesthetic about the game, the Tide will take great satisfaction in the way this one was constructed.

And that it avenged the 9-6 overtime loss on the Tide’s home field that made LSU the definitive No. 1 team heading into the game.

There was talk of an Alabama triumph throwing the national championship race into a confused state since the Southeastern Conference powers split their season meeting, and the Tigers had had played a more difficult schedule.

Could third-ranked Oklahoma State edge its way to the top in another poll? It seems unlikely. The Cowboys, 12-1, might have made for a fun opponent with their high flying offense. But the totality of Alabama’s triumph likely ends any debate.

No matter what happens in other rankings, Alabama’s players and coaches got the confetti shower and accepted a trophy on the Superdome turn Monday night.

To the astonishment of LSU Coach Les Miles.

“I did not see this coming,” Miles said.

A remarkably active ’Bama defense, combined with an unimaginative LSU offense, was the game’s primary theme.

This was the most dominant defensive performance in BCS title game history. Until Monday, a champion had never been crowned after a shutout.

“We were out there having fun,” said Alabama linebacker Courtney Upshaw, voted the game’s defensive MVP.

A defensive masterpiece was appropriate. The Southeastern Conference, guaranteed of its sixth straight BCS title when the West Division opponents were paired in the final, had ruled college football with its defensive dominance. Monday was a celebration of that approach.

Secondarily, Alabama made field goals — five of them by Jeremy Shelley — reversing the fortune that doomed the Tide to the regular-season loss.

It didn’t matter when Shelley missed an extra point after Trent Richardson flew down the left sideline for a 34-yard touchdown run – the first touchdown in the eighth quarter between the teams this season and one that sent purple and gold fans streaming out of the building. The damage was done.

LSU entered the game with a stout defense, but the Tigers didn’t hold up their end of the bargain. Alabama’s quickness beat the Tigers to the corners, stuffed the middle and bottled up quarterback Jordan Jefferson.

Jefferson had ended his high school career with a state championship in the Superdome, but there would be no such happy ending for him and a Tigers team that had won the BCS title for 2003 and 2007 in a building some 80 miles from the Baton Rouge campus.

That 2003 championship team was coached by Saban, who, along with Alabama’s triumph over Texas for the 2009 title, is the first coach to win three BCS championships.

Through three quarters, LSU had collected a total of two first downs and 66 total yards. A third down wasn’t converted until early in the fourth quarter. The Tigers didn’t take their first snap in Alabama territory until 7 1/2 minutes remained. When they got there, the Tigers lost three, were flagged for five more and Jefferson was sacked and fumbled it away on fourth down.

The Tigers had been a notoriously slow starting team this season, following behind by two scores in its previous two games, against Georgia and Arkansas.

It was Shelley’s kicks that put distance between the teams on the scoreboard.

The five field goals and seven attempts were the most ever in a BCS bowl game.

Alabama quarterback A.J. McCarron saved perhaps his best game of this season for the biggest stage. He completed 23 of 34 passes for 234 yards. He didn’t throw an interception, and the Tide wasn’t afraid to challenge what many consider to be college football’s best secondary, especially cornerbacks Tyrann Mathieu and Morris Claiborne.

“When he threw the ball it was a great ball,” Mathieu said.

McCarron connected with Darius Hanks and Kevin Norwood on deep outs, and hit tight end Brad Smelley on drags that stretched the Tigers.

Tailbacks Trent Richardson and Eddie Lacy gained the tough yards between the tackles, with Lacy especially effective in the second half dragging LSU defenders. Alabama’s offense line takes a bow here. It won the trench warfare with the Tigers up front.

LSU offered little in response. Through three quarters, the Tigers had recorded one play longer than 10 yards.

The game belonged to Alabama, and now the championship does as well.