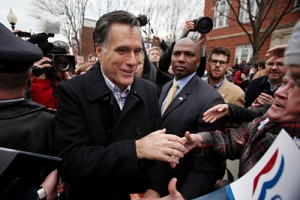 CONCORD, N.H. — Republican rivals ganged up on front runner Mitt Romney in a nationally televised debate Sunday, their last high-profile chance to challenge his lead in New Hampshire and slow his momentum toward the nomination. “Pious baloney,” one candidate sneered at Romney.

Romney appeared to brush off the attacks, but there were signs of restlessness in the notoriously fickle state as one poll showed his support slipping for the fourth straight day, Rep. Ron Paul of Texas still far behind but gaining, and former Gov. Jon Huntsman of Utah moving from obscurity into third place.

“Romney’s strategy of running out the clock is costing him margin, Huntsman is still fighting hard and beginning to rally, and New Hampshire is playing contrarian to Rick Santorum, the Iowa Caucus star of a week ago, who has dropped to fifth place.”

The poll came out as the six top candidates squared off Sunday morning for the second time in two days.

While Paul again largely did not take on Romney, the three candidates jockeying for third place took turns bashing the former governor with a zeal not seen in any of the previous 14 debates.

Gingrich unleashed his most pointed indictment of Romney yet, saying he was a poor governor with a moderate record who would be a weak standard-bearer for the Republicans against President Barack Obama.

“President Obama is going to have a very hard re-election effort. But I do think the bigger the contrast, the bolder ideas, the clearer the choice, the harder it is for that billion-dollar campaign to smear his way back into office,” Gingrich said. Romney, he said, “will have a very hard time getting … elected.”

Romney defended his record, saying he cut taxes 19 times in his one term as governor, balanced the budget, created a $2 billion rainy-day fund and created jobs.

He also said he’s a stronger candidate because he’s not a career politician, just a public-minded businessman who has sought office only when he thought he could help.

“I went to Massachusetts to make a difference. I didn’t go there to begin a political career, running time and time again,” he said. “I was trying to help get the state into the best shape as I possibly could, left the world of politics, went back into business.

Santorum also jumped in, saying Romney ran his first campaign as a liberal against the Sen. Edward Kennedy, lost, and then stepped down after his one term as governor only because he would have lost had he run for re-election.

“If his record was so great as governor of Massachusetts, why didn’t he run for re-election? I mean, if you didn’t want to even stand before the people of Massachusetts and run on your record, if it was that great, why did you bail out?” Santorum said.

“I go and fight the fight,” added Santorum, who lost his last election in 2006.

Huntsman took a swipe at Romney as well for challenging Huntsman’s service as ambassador to China under Obama.

“He criticized me, while he was out raising money, for serving my country in China,” Huntsman said. “Yes, under a Democrat. Like my two sons are doing in the United States Navy. They’re not asking what political affiliation the president is.”

Romney responded that he did not criticize Huntsman for agreeing when Obama asked him to be ambassador. However, Romney said, Huntsman’s service under Obama, plus comments praising Obama, disqualify him as the Republican alternative.