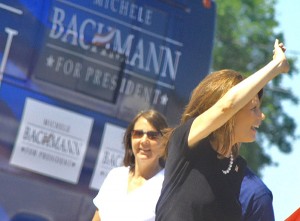 DES MOINES, Iowa — As the reality of Michele Bachmann’s failed presidential bid set in on Wednesday, the Minnesota Republican gave no indication of what’s in store for her future — or whether she even plans to stay in politics.

“While a congressman by title, a politician I never have been, nor will I ever be,” Bachmann said, announcing the end of her White House bid. “I’m not motivated in this quest by vainglory or the promise of political power.”

Bachmann, in the middle of her third term, would seem to have little to worry about if she wants to run for re-election to Congress, even amid the uncertainty of this year’s redistricting.

“There’s some concern that she’s not been visible in Minnesota over the past six to eight months,” said Ben Golnik, a Minnesota Republican strategist. “But at the end of the day, she has the support of the party activists, and she has plenty of financial support.”

The question that remains is whether the 55-year-old Bachmann, a party maverick who has built up a national brand through her campaign, is ready to return to Washington lawmaking as one of 435 House members.

A founder of the Tea Party Caucus, Bachmann has developed a reputation for occasionally hijacking the message of GOP party leaders in the House, where she is thought to have little chance of upward mobility.

As she demonstrated in earlier protests against President Barack Obama’s health care legislation in Washington, her true power base lies outside Congress, not within it.

Kent Kaiser, a professor of communications at Minnesota’s Northwestern College, said although Bachmann lost in Iowa, she ended her bid “looking very good.”

“She could have a very lucrative career working on the speakers’ circuit,” said Kaiser, a Republican activist who supports front-runner Mitt Romney. “It would be a very nice, easy career … people love listening to her.”

Minnesota Republicans are known to be looking for a marquee candidate to take on Democratic U.S. Sen. Amy Klobuchar this year. Scott Fischbach, the executive director of the anti-abortion Minnesota Citizens Concerned for Life, is a Bachmann fan who would love to see her run against Klobuchar. But he does not think that will happen.

“I’ve heard repeatedly that she is not going to do that,” he said

Bachmann, focusing on her presidential run for much of the past year, has given no indication that she might jump into a Senate race. But at a rally at her campaign headquarters in Iowa this week, her son Lucas joked about the media spectacle of a matchup with Democratic Sen. Al Franken.

Another prospect for Bachmann would be to take on the mantle of a national movement or organization. Her political beginnings trace back to the pro-life movement, she fought against gay marriage in the Minnesota Legislature, and she electrified tea partyers with her outspoken criticism of Obama’s “agenda of socialism” in Congress.

Fischbach said Bachmann would shine as a commentator and speaker, if she decides to go that route. “She would be great at it,” Fischbach said. “She brings a lot of passion, a lot of energy. She definitely can motivate people.”

But for now, Republicans in Bachmann’s district eyeing a possible run to replace her — and there are many — have resolutely avoided looking like it.

David FitzSimmons, 6th District GOP chair and longtime Bachmann backer, said he would expect Bachmann to run for a fourth term. He noted that she only “suspended” her congressional campaign when she ran for president.

“I like having her as my congresswoman,” he said.

Despite that, another term in the House isn’t what former Bachmann staffer Jack Tomczak sees in Bachmann’s future.

“I think she will try and maybe succeed at getting some kind of gig with Fox news and pump out of a bunch of books and get a bunch of paid speaking gigs,” said Tomczak, a Bachmann critic and conservative radio talk show host. “She has made it pretty clear to the people of Minnesota’s Sixth that she is an Iowan.” On the stump Bachmann repeatedly referred to herself as an “Iowa woman.”

Tomczak said the talk circuit would fit Bachmann well. “The Michele Bachmann I know is motivated by being in the spotlight of the media,” he said.

Looking at Bachmann’s long absence from Minnesota and her lengthy list of missed votes in Congress, Democrats are readying their line of attack.

“We welcome her back to Minnesota,” said state DFL Party Chairman Ken Martin. “She has been gone so long, her constituents have forgotten about her.”

Martin also noted that Bachmann’s congressional district in the fast-growing suburbs is slated for a radical overhaul, needing to shed some 100,000 people. “She’s doing what a lot of people in Minnesota are doing,” he said. “She’s waiting to see what the (redistricting) lines look like.”

Bachmann spokeswoman Alice Stewart said after Bachmann’s announcement that there had been no time for discussions about her political future. “She just made up her mind to do this this morning,” Stewart said of Bachmann’s withdrawal from the presidential race. “So in terms of what’s next, she just really doesn’t know.”

Stewart called it an emotional decision for Bachmann.

“She prayed about it and thought about it all night long,” Stewart said. “This morning it was clear to her this was the right step to take.”