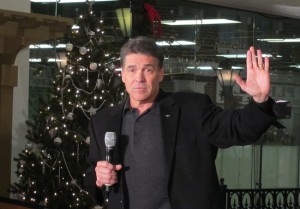 With former Massachusetts Gov. Mitt Romney and former Pennsylvania Sen. Rick Santorum leading with about 96 percent of the vote counted, and Perry’s fellow Texan Ron Paul not far behind, the Texas governor’s hope for a third-place finish to infuse momentum into his struggling presidential bid fell well short.

Former House Speaker Newt Gingrich of Georgia was a distant fourth with about 13 percent of the vote, while Perry was running fifth at about 10 percent.

In a late-night speech to his Iowa supporters, Perry announced that he would go home to Texas to reflect upon “whether there is a path forward for myself in this race.”

Perry led the field shortly after entering the race in mid-August, but he plunged in the polls after poor debate performances and other miscues.

Perry had vowed to remain in the race despite the Iowa results, portraying himself as a long-distance runner at the outset of a campaign marathon. But his poor showing in Iowa leaves him struggling to survive, analysts said.

Before he made his late-night statement about reconsidering going forward, Perry’s post-Iowa strategy seemed to be focused heavily on the first Southern primary, in South Carolina, where he hoped to use his stature as a Southern governor and his strong ties to evangelical voters to rebound into contention for the 2012 presidential nomination.

Prior to his announcement about going back to Texas, the governor had planned to leave Iowa on Wednesday afternoon to head to Aiken, S.C., where he was to walk the main street and hold a town-hall meeting. Other South Carolina stops were to include North Augusta, Lexington and Orangeburg. All that was in doubt after Perry said he’d return to Texas instead.

Perry’s immediate post-Iowa focus on South Carolina stirred initial speculation that he planned to effectively ignore next Tuesday’s primary in New Hampshire, where Romney, who served as a neighboring state governor, holds a commanding lead. But aides said Perry would conduct campaign events when he went to New Hampshire to participate in two weekend debates. That too, however, was cast in doubt by Perry’s return to Texas.

With his rugged good looks, an unblemished record of nine election victories and more than a decade of executive experience as Texas’ longest-serving governor, Perry seemed destined for a strong performance when he entered the 2012 presidential race after weeks of consideration. He quickly surpassed Romney to take the lead, stirring talk that he was on the march toward the Republican nomination.

But a lackluster performance in early debates — including his “oops moment,” in which he forgot the name of one of three agencies he wanted to eliminate — contributed to a prolonged downturn in the polls. Perry recovered in later debates and seemed to regain his political footing in a just-ended 44-city bus tour, in which he delivered impassioned appeals for Iowans to rally behind his candidacy.

As he made a final round of appearances Tuesday, Perry urged potential caucus-goers to join him in his mission “to take America” back from Washington insiders and out-of-control spending. In an appearance before employees at the Principal Financial Group, one of Des Moines’ biggest employers, he won at least one convert by promising that he wouldn’t regulate or tax use of the Internet if he becomes president.

Travis Rosa, an analyst at the international firm, said at the outset of the event that he was undecided on a candidate. But after Perry gave him a favorable answer to his question about the Internet, Rosa said he would “probably” support Perry.

Before the voting Tuesday, Robert Haus, Perry’s Iowa co-chairman, said the Perry campaign planned to have a presence at nearly all of Iowa’s 1,774 precinct caucuses. Supporters, many wearing white Perry T-shirts, made speeches to tout his candidacy and worked the crowd before the caucuses.

“We’ve got a good runner with strong legs and he’s going to go the distance in this marathon,” Haus said.

Perry’s return to Texas cast that into doubt.