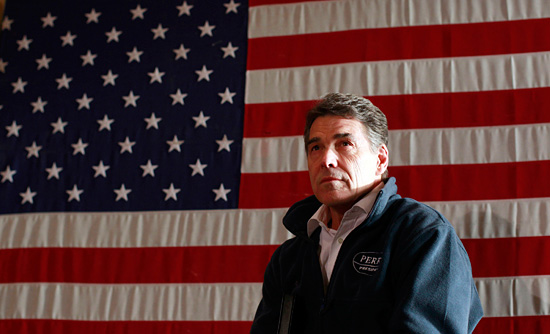 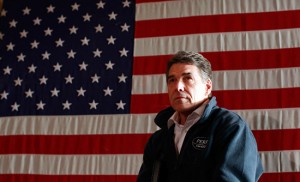 DES MOINES — Republicans enter a new election year Tuesday debating more than just who should be their nominee for president against Barack Obama. They’re engaged in a struggle over how radically they can or should change the country’s course.

(PHOTO: Texas Gov. Rick Perry waits to be take the stage while being introduced at a campaign stop in Carroll, Iowa,Monday, January 2, 2012. )

On one side is the tea party conservative, the kind of voter Richard Nixon once said belonged to a silent majority, who simmered as the party spent and piled up debt through the Bush years, then exploded with rage with the ascent of Democrat Barack Obama and even more spending and debt.

On the other side is the pragmatic, establishment Republican, who also yearns to change course but argues the party first must win power. These Republicans fear that confrontational politics and policies could scare off moderate independents, making a win more difficult and governing impossible.

The fault line was evident in 2010 primaries that purged moderate candidates in states such as Delaware and Nevada; in state capitols over how hard to hit public employees; and in the U.S. House of Representatives in clashes between party leaders prone to compromise and new members intent on drawing a hard line in the federal budget.

And it cuts through the presidential campaign, as tea party conservatives cheer candidates such as Rep. Ron Paul of Texas, who vows to cut $1 trillion in spending in his first year, Texas Gov. Rick Perry, who slams one rival for voting to raise the nation’s debt ceiling eight times, and Rep. Michele Bachmann of Minnesota, who boasts of her opposition to raising the government’s debt ceiling last summer.

At the same time, pragmatists support candidates such as former Massachusetts Gov. Mitt Romney, who stresses a more collaborative approach to governing. Romney, for example, says he’d cut the federal work force, but through attrition, not layoffs.

Rick Halvorsen, an insurance salesman from Indianola, Iowa, and chairman of the Warren County Republican Party, is among those who want the party to be bolder, much bolder, even if it risks losing an election.

“The alternative is to lose our country,” he said. “We’re $15 trillion in debt. Nobody’s got the intestinal fortitude to do what needs to be done. We’re way past time to do something.”

Worse, he said, the idea of softening the party’s stand to win the election doesn’t even guarantee victory. “That’s what they told us about McCain,” he said of the 2008 nominee who went on to lose the general election.

He decided late to support former Sen. Rick Santorum of Pennsylvania, who urged Iowa Republicans to vote for someone who should win, not just someone who could win. “Don’t put forward somebody who isn’t good enough to do what’s necessary to change this country,” Santorum said.

Darwin Hofmeister, a farmer from Ackley, Iowa, is another Republican weary of compromise by his party.

“When we got a chance to make a difference, we didn’t. George W. Bush, with a Republican Congress, he didn’t change anything. Instead, we got more Medicare,” said Hofmeister.

At a town hall meeting in Mason City, he asked Romney if he would really cut spending. He walked away unconvinced.

“It wasn’t enough to convince me he’s conservative,” he said. “Now, that governor of Wisconsin. He stuck it out and now it’s working.”

Many conservatives cheer Wisconsin Gov. Scott Walker and Ohio Gov. John Kasich for their moves last year to cut pay, benefits or bargaining rights for public employees. But they drew a political backlash and are not universally popular even among Republicans.

In the political battleground state of Pennsylvania, for example, a top aide to Republican Gov. Tom Corbett recently criticized both Walker and Kasich in an internal memo obtained by the news media.

He noted that Walker’s actions drew tens of thousands of protesters, prompted recall elections that narrowed the Republican majority in the state senate, and could lead to a move to recall Walker. He also wrote that Kasich’s move was forced onto the ballot, and was “resoundingly” rejected by Ohio voters.

In Iowa, which kicks off the voting for a Republican nominee Tuesday evening, the fault line was evident in a poll of likely precinct caucus attendees by the Des Moines Register, which found Romney and Paul atop the field, with Santorum in third and gaining. .

Asked which candidate is most concerned about reducing government debt, a defining issue for the party, 42 percent said Paul and 13 percent said Romney.

Asked who was the most electable in a general election, the results flipped, with 48 percent saying Romney and 12 percent said Paul.

Pollster Scott Rasmussen, who is not affiliated with Register poll, also found a split, one he boiled down to “some are fed up with the status quo and some want a more mainstream candidate.”

Romney stresses that he is the mainstream candidate who can win.

Ron Carlson, an auto parts deliveryman from Marshalltown, Iowa, is the kind of Republican intrigued by a candidate like Paul. “He does have some good ideas,” he said.

But as he neared Iowa precinct caucuses on Tuesday, he said he thought the party should not go that far. “He may be too much of a radical on some things.” He was leaning toward Romney as the safe alternative.

“That’s not all bad. Bill Clinton was a moderate and things went pretty well then. Romney has things in his past that lean him toward being a moderate, like health care. We need something in the middle to swing independent voters our way.”