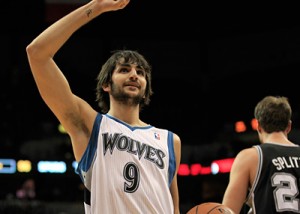 MINNEAPOLIS — Coach Rick Adelman talked about it Sunday night, minutes after his Timberwolves beat Dallas for their first win this season. And again Monday, a little more than an hour before the Wolves’ game with San Antonio:

Adelman is in his first season here, but he knows the team’s M.O. Up, then down. Hot, then cold. Engaged, then detached. Heck, it already happened once this season, when the Wolves responded to a nail-biter loss on opening night with a flat performance in Milwaukee. Adelman wanted his team to build off Sunday’s victory, not be satisfied with it.

Could the team handle prosperity?

The short-term answer is yes. The Wolves completed a two-day Texas two-step with a 106-96 victory over a San Antonio team that entered the game 3-1 but played without Manu Ginobili (broken finger) for much of the game. After getting their first victory in 294 days Sunday, the Wolves (2-3) now have their first two-game winning streak since consecutive home victories over Indiana and Utah last March.

And how satisfying was this?

The Wolves beat the Spurs (3-2) for the first time in 17 games and for only the second time in the past 23 meetings between the two teams.

The Wolves did it with balance and by continuing their incredible streak of three-point shooting, going 12-for-21 from behind the line. All five starters scored in double figures. Kevin Love hit four of nine threes, scored 24 points and had 15 rebounds. Michael Beasley, playing despite having five stitches in the index finger of his shooting hand, hit on eight of 15 shots for 19 points.

Also in double figures: Darko Milicic (10) and Wes Johnson (14). San Antonio got 16 points each from Tim Duncan and Richard Jefferson.

The Wolves spread the floor and shared the ball. The Spurs opened the game by scoring the game’s first seven points. After that it was all pretty much one-sided. The Wolves quickly caught the Spurs and led by as much as 13 points in the second quarter.

That lead held up until midway through the fourth quarter, when a short offensive laps allowed the Spurs to pull within 100-90 on Danny Green’s basket. But Ricky Rubio responded with a drive for a score, then Ridnour drove the lane and scored on a teardrop to push the lead back to 14.

The Spurs, disjointed on offense for much of the second half, never were allowed back in the game. This despite the fact the Wolves, who had been on fire offensively, scored only 12 points in the fourth quarter.

So now the question is, How will the Wolves handle their two-game winning streak? The last time didn’t work out so well. After winning twice last March the Wolves didn’t win again for the rest of the season. That doesn’t figure to be a problem this time.