Oregon gets its signature win, 45-38 over Wisconsin in Rose Bowl 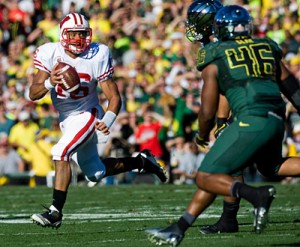 The only thing missing was a victory in a Bowl Championship Series game.

And though Kelly and his players downplayed that fact throughout the week leading up to the 98th Rose Bowl, the jubilant scene on the field after a 45-38 victory over Wisconsin on Monday said otherwise.

“That has certainly been on our mind,” Oregon quarterback Darron Thomas acknowledged after passing for three touchdowns, “so the emphasis was to win this one. We can play with anyone in the nation — LSU, anyone.”

Oregon’s season began with a loss to Louisiana State, which will play Alabama next Monday night in New Orleans for the BCS title.

USC sideswiped Oregon’s chances of earning a rematch by defeating the Ducks in November.

But Oregon still had plenty to play for in the Rose Bowl, especially with critics saying that Kelly could not win a big postseason game.

Oregon, which lost in the Rose Bowl two years ago and in the BCS title game last season, outlasted Big Ten Conference champion Wisconsin in the highest-scoring game in Rose Bowl history.

The outcome was not decided until officials ruled that time had expired before Wisconsin quarterback Russell Wilson spiked the ball with the hope of running one more play from Oregon’s 25-yard line.

“This is what we’ve been hoping for,” Oregon defensive end Terrell Turner said. “‘We always come up too short or shoot ourselves in the foot.

“But no matter what, we’re going to come through and never give up.”

Kelly, who has a record of 34-6 in three seasons at Oregon, continued to play down the personal significance of the victory.

“We’re just excited for the win,” he said. “I think a lot has been made out of we hadn’t won a BCS game before.

“To be honest with you, I think that could be the case if we had been in seven or eight or nine of them. We’d only been in three.”

The game pitted two of the nation’s highest-scoring offenses, and neither disappointed the crowd of 91,245 on a warm, sunny day in the Arroyo Seco.

De’Anthony Thomas, the former Crenshaw High star, scored on touchdown runs of 91 and 64 yards in his only carries. He also caught four passes and amassed 125 yards in kickoff returns.

Oregon’s defense also came up with several big plays, none more important than a fumble forced by cornerback Terrance Mitchell and recovered by linebacker Michael Clay with four minutes left.

It was the second consecutive Rose Bowl loss for Wisconsin, which fell to Texas Christian last year.

Wilson passed for two touchdowns and ran for one, running back Montee Ball rushed for 164 yards and tied Barry Sanders’ single-season NCAA record with his 39th touchdown, and the Badgers defense caused two turnovers — one that resulted in a touchdown.

Still, it was not enough to stop the Ducks.

“I’m kind of tired of tears of sadness,” Wisconsin Coach Bret Bielema said. “I wanted to come out here and experience tears of joy at some point.”

The score was tied, 28-28, at halftime, but De’Anthony Thomas wasted no time giving Oregon its first lead, taking a handoff on a sweep to the left, turning the corner and racing 64 yards to the end zone.

The Badgers answered with a field goal to make the score 35-31 and set up what turned out to be a key sequence.

On the ensuing kickoff, De’Anthony Thomas fielded the ball and knelt in the end zone just inside the goal line. His foot appeared to have touched the line, causing Bielema to ask officials about it just as Oregon was about to run a play.

Officials had ruled it a touchback, saying that the ball had not crossed the goal line, and that call stood. The ball was marked at the 20-yard line and Wisconsin was charged with its second timeout of the half.

The Badgers took the lead on Wilson’s touchdown pass Nick Toon and had a chance to add some cushion when safety Aaron Henry intercepted a pass.

But Oregon linebacker Kiko Alonso intercepted a pass by Wilson on the next possession.

Wisconsin got a final chance with 16 seconds left after forcing Oregon to punt.

Wilson completed a 29-yard pass to Jared Abbrederis to Wisconsin’s 42 and then hit Toon for 33 yards to Oregon’s 25.

But Wisconsin was out of timeouts.

The clock had two seconds on it when officials ruled the ball in play and signaled for the clock to be started, and Wilson took the snap and spiked the ball.

Officials, however, reviewed the play and ruled that time had expired, starting Oregon’s celebration.

“I didn’t think there was any way that two full seconds ran off the clock there,” Wilson said. “It would have been nice to have a chance there.”

Oregon safety John Boyett said the Ducks defense would have preserved the victory.