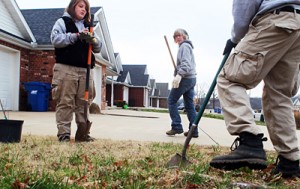 JOPLIN, Mo. — The volunteers started arriving at first light. Some lived nearby. Others drove through the night. No one summoned them. They just showed up. A massive tornado had hit Joplin hours earlier. The need for help was huge. At an impromptu staging area, they waited to be told what to do.

Bruce Bailey looked out at the crowd. He was director of the AmeriCorps St. Louis Emergency Response Team, which was responsible for organizing the volunteer effort here. As the sun rose, he saw at least 500 people. By day’s end, the number jumped to 3,000. He was stunned.

That was just the beginning of the volunteer effort to help Joplin after the devastating May 22 tornado, which killed 161 people and leveled a large swath of this southwest Missouri town. More than 60,000 registered volunteers came to Joplin in the following months. An additional 20,000 people also were believed to have helped.

It was not just the tasks performed by volunteers that resonated with Joplin residents. It was what all those volunteers represented.

“It lets them know the world cares,” Bailey said.

Residents — reeling from the disaster — saw a show of force, strangers offering to help in whatever small way they could, city streets filled with vehicles with out-of-state license plates. One man even paid his own way from Japan to volunteer for two weeks.

“It was amazing,” said Michael Harris, a hairstylist at the Ritz Hair Salon, where the marquee out front last month still read “Thank you volunteers.” “It was uplifting. It made you feel like it was going to be OK because all these people were here to help, like you could get through it.”

Harris recalled meeting a volunteer nurse who gave him a tetanus shot, a common precaution taken after the tornado. He asked her where she was from. Kansas City, she said. It was only 150 miles away, but he still almost started crying.

Small moments like that happened all over town. Jerrod Hogan, vice president of an engineering company, was at a Walgreens near the hardest-hit area. It was a night or two after the tornado. He had seen so much destruction he was becoming numb to it. He met a couple who said they were from Mississippi. He thought they must be stranded tourists. He asked what brought them to Joplin. They explained they were volunteers.

“That was the first time I realized we weren’t by ourselves,” he said.

Joplin’s city manager, Mark Rohr, called the outpouring of support “the miracle of the human spirit.” He first used the phrase at a ceremony one week after the tornado. He’s been repeating it ever since.

“I’ve been pleasantly surprised,” he said.

In those first weeks, volunteers helped rescue crews pick through the rubble to look for survivors. Volunteers handed out sandwiches, water bottles and fruit to anyone in the tornado zone. They cut down broken trees. They picked through debris for salvageable items — the photo albums, jewelry and legal papers scattered by 200 mph winds. They carried bags of clothes, pots and pans, soaps and toothbrushes they had purchased themselves to hand out to residents who had lost everything.

Volunteers helped clear the roads. They patched roofs and boarded up broken windows.

One volunteer was Roy Day.

He first made the seven-hour drive from his home in Blandinsville, Ill., towing his Bobcat loader, two weeks after the tornado. No one asked him. He just felt the need to help. The 41-year-old father of four has returned to Joplin at least 15 times. He travels mostly on weekends off from his concrete-pouring business.

He also recruited several west-central Illinois communities and churches to build a new house for a single mother with three children who lost her home in the tornado. They raised $125,000. Already, the foundation has been poured, and the roof is on.

“Anywhere you go people say, ‘Thank you,’ ” Day said. “You don’t want the recognition, but they want to give it to you.”