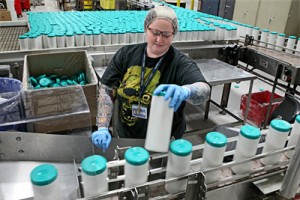 MILWAUKEE — Five years ago, whistleblowers sent a letter to federal regulators warning that contaminated baby wipes were streaming out of an Arkansas factory — and the Wisconsin-based owner wasn’t telling the government or the public.

The two employees wrote to the U.S. Food and Drug Administration that Sheboygan-based Rockline Industries knew of the contamination but continued to ship potentially dangerous wipes to “the hands and bodies of thousands of Americans.”

They even warned that plant officials had a code phrase they would broadcast over the intercom — “Judy Life to the front desk” — in the event of a surprise inspection.

Two weeks later, on Nov. 7, 2006, an FDA investigator arrived unannounced and found problems including faulty product testing and poor sanitation. Company records show customers had been complaining about mold and foreign objects in the wipes, such as a dead cockroach and razor blade.

Rockline, which makes wipes for retailers under different brand names, announced a nationwide recall later that month of 20 brands of potentially contaminated baby wipes but said they posed little risk.

FDA test results soon came back, proving the suspect wipes were contaminated with Burkholderia cepacia, a bacterium that poses a health risk to anyone with a compromised immune system. The levels were thousands of time higher than FDA and industry guidelines, enough to sicken anyone, even those with healthy immune systems, experts told the Milwaukee Journal Sentinel.

“I wouldn’t want to use a wipe with organisms at that level, especially on a baby,” said Charles Gerba, a microbiology professor at the University of Arizona and a member of an FDA advisory board.

The FDA took no enforcement action.

Internally, Rockline worked to find and punish the person top executives referred to as “the mole,” doing handwriting analysis and considering DNA samples and fingerprints of workers, records filed in court show.

Now, the same plant is in the midst of recalling the same product, again because of contamination. The FDA has returned and found fresh problems, but once again hasn’t taken any enforcement action.

And the public knows even less about this recall.

Rockline, one of the largest makers of baby wipes and coffee filters in North America, was one of three companies nationwide to launch recalls of potentially contaminated wipes last year.

The Hartland-based Triad Group was raided by federal agents in April and recalled sterile alcohol wipes used in hospitals and other products. The FDA has received reports of 11 deaths and hundreds of illnesses possibly connected to the use of Triad wipes. New York-based Professional Disposables International is in the midst of its own recall of alcohol prep wipes because of bacterial contamination. A review of case files and an analysis of the FDA’s inspection database by the Journal Sentinel shows lax manufacturing practices by the wipes manufacturers, shoddy oversight by the FDA and a failure by anyone to adequately notify the public of health risks.

While the disposable wipes industry has grown rapidly, churning out everyday products that millions use in hospitals and at home, the nation’s public health watchdog has not kept up.

The FDA has not inspected several thousand drug and device makers in at least five years, and hundreds of plants have not seen an inspector in a decade. Despite the whistleblower’s warning and serious problems found in the Arkansas plant, Rockline’s flagship plant in Sheboygan was last inspected in 1992. FDA records show Rockline’s plant in south China and products shipped from there have not been inspected. By law, both plants are supposed to be inspected every two years.

FDA inspectors found problems at Rockline’s Arkansas plant in 2001, in 2006 and again in June — sometimes in the same areas — but the agency did not take enforcement action.

An FDA inspector overlooked key problems in the Arkansas plant in 2006. A bacterium that can cause toxic shock syndrome was listed in company lab results, but not noted in FDA reports. The inspector also failed to note customers had complained about foreign objects in the wipes.

No serious injuries or illness have been definitively linked to the contaminated wipes. However, the only public notice of the current recall has been an item buried deep in the FDA website. If people were sickened, they may not have known the cause.

Rockline officials said they put consumer safety first and denied they knowingly shipped contaminated products. They said as soon as they knew there was a problem they took action. If the problems were serious, they said, the FDA would have taken action.

Rockline president Randy Rudolph says the company has a strong track record for making safe products, and that the problems in Arkansas were an anomaly that led to improvements at all of its plants.

“We are all about doing the right thing, and it’s the reason we are having success with our major customers,” he said. “I am damn proud of what we do here.”

Rockline founder Ralph Rudolph, father of Randy, was a pilot for the German military during World War II before he immigrated to the United States after the war, by his own account. He worked as a janitor when he arrived, later rising to vice president of a Sheboygan-area factory before the plant moved and he was laid off.

Unemployed at 54, he started Rockline in 1976 with a focus on coffee filters. By the mid-1980s sales flattened, but stores soon asked the company to get into a promising new market: disposable wipes.

In 1989, the family-run company bought a plant owned by Midwest Converting in Springdale, Ark. The plant made moist towelettes and baby wipes for private label customers. Rockline produced the products for others, including Wal-Mart and Roundy’s.

Over 15 years, the Arkansas plant expanded from a $5 million-a-year operation to one that brought in more than $150 million in revenue, according to court documents.

The company eventually expanded to six plants — four in the United States, one in China and one in England — and raced to the forefront of a billion-dollar industry. The Sheboygan plant added baby wipe production in the 1990s and now has 700 workers. It recently announced a $10 million expansion.

There have been no recalls of products made in the Sheboygan plant, according to FDA records.

The last time FDA was in the Sheboygan plant was 1992, according to agency records — and that was a mistake. An FDA inspector went to Sheboygan in response to a complaint about wipes made in Arkansas. A report said company leaders knew little about wipes, three years after acquiring the Arkansas operation.

“Randy Rudolph said neither himself or anyone else at the Sheboygan plant are familiar with the baby wipe products or formulas,” the 1992 FDA report read.

Disposable wipes are used for everything from combating infectious diseases to cleaning up household messes. Demand for wipes, both consumer and industrial, is forecast to top $2.3 billion in 2014, up from $1.4 billion in 2004.

But as their popularity has surged, the FDA is saddled with a patchwork of rules.

Wipes labeled as sterile are required to be free of bacteria and are classified as drugs, used to treat or prevent diseases. That’s because they can come in direct contact with wounds, bloodstreams and spinal fluid. They are tested prior to going on the market, and production plants are supposed to be inspected by the FDA every two years. Wipes also can be considered devices if they are inserted in an injection kit, for instance.

Non-sterile wipes are not subject to clear bacteria limits but are regulated as a drug if they are anti-bacterial. They are typically used for tasks such as wiping down countertops and cleaning hands.

Other non-sterile products, such as baby wipes, are regulated as cosmetics and are subject to less oversight. When it comes to baby wipes, Congress has left the FDA largely toothless.

Federal law says a cosmetic must not be “adulterated” — meaning made in unsanitary conditions — or have high levels of organisms on it.

The agency can take legal action against a company in such cases. But the law does not spell out what conditions or organism levels are violations, leaving each company to set its own standards, microbiologists said.

“Wet wipes are not well-regulated, which has shown itself to be a problem as they are difficult to preserve as a product and difficult to manufacture in a sanitary manner,” said Scott Sutton, a New York-based microbiologist who has worked as a consultant to cosmetic manufacturers for 25 years.

Baby wipes are made from non-woven paper material that is soaked in water, with a small amount of sanitizer and preservative. When packaged and sealed, it creates a ripe environment for bacteria growth when contaminated.

Companies are not required to report contamination but are encouraged to notify the FDA of a recall. The agency cannot order a recall of wipes — sterile or not.

Congress requires the FDA to inspect drug firms every two years, but the Journal Sentinel found that more than a thousand drug-making locations have not been inspected in five years or more. FDA officials, who did not dispute the findings, said they focus limited resources on plants that pose the most risk to the public.

As for cosmetic manufacturers, registration is voluntary, and the FDA has no mandate to track or inspect the plants.

FDA manuals suggest examining cosmetic firms that make “high-risk” products such as those used on infants, because they pose “the greatest potential health hazard if they become contaminated with bacteria.”