Vikings’ disastrous season ends with a loss at home 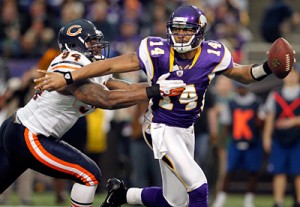 That has to count for something, right?

So if you have any of those plastic New Year’s horns left lying around, feel free to deliver one final full-lunged Viking toot.

(PHOTO: Minnesota Vikings quarterback Joe Webb (14) escaped the grasp of Chicago Bears Chauncey Davis (94) in the third quarter at the Metrodome in Minneapolis, Minnesota, on Sunday, January 1, 2012. The Bears defeated the Vikings, 17-13.)

Consider it a tension breaker. Or a celebratory gesture, that the plug has finally been pulled on this misery.

The Vikings stumbled one last time Sunday, this time 17-13 to the Bears at Mall of America Field. It was their 13th loss in a disastrous season and ended in the most fitting manner possible: with the backup quarterback teasing the home crowd with his breathtaking athleticism but ultimately throwing a loss-sealing interception in the final minute.

Once again, the Vikings did just enough right to hang around all the way down to the final series. But once again, they weren’t sharp enough to pull out a victory.

Instead of some newfound 2012 pep, there was one final dose of 2011 deflation.  And once again,  coach Leslie Frazier was left to pat his players on the back simply for trying hard.

“In departing this locker room,” Frazier said, “I just expressed my appreciation for the fight our guys showed throughout the year. With as difficult as this season has been and with the number of close losses we’ve had, (it was encouraging) for them to show the resolve they have shown.”

In case you missed the first 15 games of this headache-filled season, Sunday’s finale provided a fitting summary.

If you wanted one last look at some rookie quarterback struggles, then consider the numbers from Christian Ponder’s final start: 4-for-10 for 28 yards and a poorly thrown interception that Bears cornerback Charles Tillman returned 22 yards for a touchdown.

Oh, and did we mention, Ponder’s season ended with 13 minutes, 28 seconds left in the second quarter when he aggravated a hip pointer upon taking a hit from Bears end Israel Idonije?

So much for quelling the quarterback anxiety heading into the offseason. Not with Joe Webb passing for 200 yards over the final three quarters and further stimulating the outside chatter on which young quarterback truly deserves to start.

“I don’t know if you ever have a firm grip on the starting job,” Ponder confessed. “Ever since I was in middle school, I was battling for a job.”

The Vikings’ secondary weaknesses? The errors weren’t quite as glaring Sunday as they have been throughout the season. But the one touchdown the defense did allow came when safety Mistral Raymond was beaten badly for a 22-yard score by Roy Williams.

Yet again, there were boneheaded penalties, costly mistakes and golden opportunities squandered.

Consider, for example, the Vikings’ second-to-last possession, one they began at the Bears 20 after a nifty Cedric Griffin interception.

The dividends from that takeaway: the offense lost 3 yards and kicker Ryan Longwell never even got to swing at a 41-yard field goal attempt because Matt Katula’s snap to holder Chris Kluwe was high and outside.

Not that it was all bad Sunday. Percy Harvin had 115 receiving yards and ran for a 5-yard touchdown in the first quarter, further proof that he can be a major standout in this league.

And defensive end Jared Allen, the Vikings’ lone Pro Bowl pick, showed he had no interest in taking the holiday off, delivering one last captivating and record-breaking performance. Allen recorded 3.5 sacks to finish with 22, a franchise best and just a half-sack off Michael Strahan’s NFL record.

Allen was in good spirits. Like so many Vikings, the season’s conclusion had provided some obvious relief. But even with his own uplifting accomplishments, Allen made it clear his team’s failure was bothersome.

“Winning is what this job is all about,” he said. “It’s been a great individual season. But at the same time, we are 3-13. That’s garbage.”

For Frazier, who asserted last week he was eager to step back from the in-season chaos in order to focus more on the big picture, Sunday’s game wasn’t an ending so much as a transition into a major cleanup process.

Coaching changes will now be seriously discussed. A roster shakeup will be planned.

“I think you have to look at everything,” Frazier said.

The season is finally over. That’s worth celebrating. But now the reconstruction must begin.

0 0 votes
Article Rating
Subscribe
Login
0 Comments
Inline Feedbacks
View all comments
PrevPreviousSteelers will end the Broncos’ optimism, once and for all
NextPackers Hold Lions in 45-41 VictoryNext