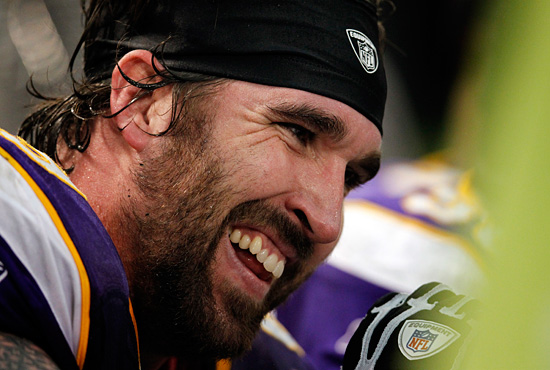 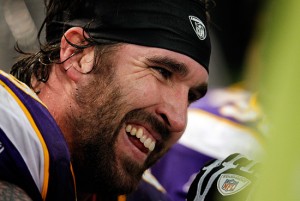 (PHOTO: Minnesota Vikings Jared Allen (69) celebrated on the sidelines after he sacked Chicago Bears Josh McCown (15) in the third quarter at the Metrodome in Minneapolis, Minnesota, on Sunday, January 1, 2012. The Bears defeated the Vikings, 17-13.)

He also wouldn’t have complained if Chicago Bears quarterback Josh McCown had offered his help. Maybe a little trip, turtle roll and two-hand-touch sack. Those count, too.

Allen stood one calf-roping celebration from Michael Strahan’s single-season NFL sack record Sunday, and he smelled blood. Everyone inside the Metrodome knew it, including the Bears, who resorted to double- and triple-teams at times to prevent being on the wrong side of history.

Ultimately, the Vikings’ offense didn’t do enough to force the Bears into attack mode. Instead, the Bears simply milked the clock with handoffs for a 17-13 victory, leaving Allen a half-sack shy of Strahan’s record.

A stream of teammates approached Allen afterward to offer congratulations and acknowledge his efforts in an otherwise forgettable season.

“It’s like being runner-up at the prom,” Allen said. “The crown just doesn’t mean as much.”

Allen recorded 3½ sacks Sunday to finish with 22, which eclipsed Chris Doleman’s team record of 21 set in 1989. Doleman watched the game from the sideline and congratulated Allen after he set the franchise record in the third quarter. Then he encouraged Allen to go after Strahan’s mark.

“I was just amped, just to be a half a sack away,” Allen said.

His pursuit of Strahan’s record made the fourth quarter of a meaningless finale in a dismal season historically compelling. Allen looked more energized with each sack and pass rush, and fans buzzed in anticipation every time the defense took the field. His teammates felt it, too.

“You were like, this is going to happen,” linebacker Chad Greenway said. “You wish McCown would have pulled a Brett Favre.”

Favre, remember, handed Strahan a phantom sack by falling down for the record-setter in 2001. That play generated criticism over the validity of the record, and it came up again with Allen finishing a half-sack behind Strahan.

Allen, however, didn’t join the chorus.

“It doesn’t bother me at all,” he said. “People talk about it, but a sack is a sack is a sack. I have gotten some where I was the closest to a guy when he ran out of bounds, so I will take it.”

Greenway joked on the sideline that somebody should ask McCown if he would take a dive.

“But obviously in a close game it’s not going to happen,” Greenway said. “And it’s the Bears. They’re definitely not going to do it.” 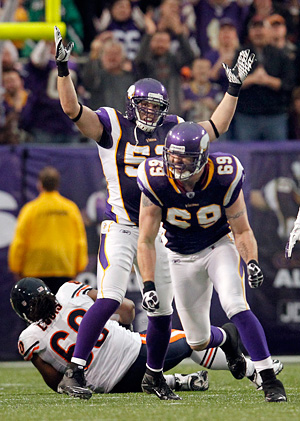 (PHOTO: Minnesota Vikings Jared Allen (69) celebrated after he sacked Chicago Bears Josh McCown (15) in the third quarter at the Metrodome in Minneapolis, Minnesota, on Sunday, January 1, 2012. The Bears defeated the Vikings, 17-13.)

Instead, the Bears used tight ends to help left tackle J’Marcus Webb, who also had his share of one-on-one matchups early in the game.

“They made it difficult on (Allen) that last 15 minutes,” defensive tackle Kevin Williams said. “Shoot, they put a bunch of guys over there. They didn’t want to give it up.”

Allen figures he left at least three sacks on the field this season, including one that was a ruled a team sack against Green Bay Packers quarterback Aaron Rodgers. A few others slipped through his grasp.

“Each year you are going to have a bunch of ‘almosts,’ ” he said. “When I first got into the league, one of the vets told me, ‘You’re going to miss two before you get one.’ ”

Allen didn’t miss too often this season, which enabled him to double his sack total from last season (11), his lowest since 2006. Allen vowed to return a different player during his exit interview with Leslie Frazier last January.

The Vikings should return the favor this offseason. They need to upgrade the talent around Allen so that his premier pass-rushing skills aren’t wasted in 3-13 seasons. Allen was one of the few bright spots this season and not just because of his sacks. He played hard every down, every game, regardless of the circumstances. He kept fighting as the losses stacked up.

“It’s a great example for a lot of us,” Williams said. “Just to see him giving it all he’s got.”

Allen did that to the end but came up just a little short of the record. He usually celebrates sacks by pretending to rope a calf. That would have looked fairly tame if he had gotten one more half-sack.

“I would have thrown my helmet in the crowd,” he said. “I would have jumped up, kissed my wife, kissed my baby in the suite, walked into the locker room and quit. I might have done some turf angels. They probably would have given me a 15-yard penalty because I had been celebrating so much.”

In a season like this, no one would have cared.