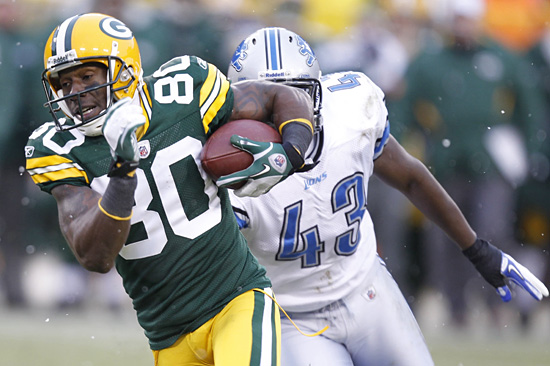 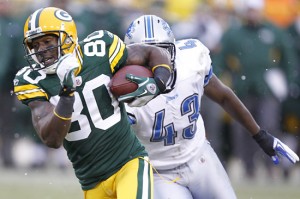 (PHOTO: Green Bay Packers Donald Driver sprints for a touchdown against the Detroit Lions in the fourth quarter in Green Bay, Wisconsin, Sunday, January 1, 2012. The Packers defeated the Lions, 45-41.)

In a season that saw Aaron Rodgers make headlines on a weekly basis, it was backup Matt Flynn who capped the Packers’ 15-1 campaign by throwing for an eye-popping 480 yards and six touchdowns, including the go-ahead score to Jermichael Finley with 1:10 remaining.

With the No. 1 seed in the NFC already secured, Green Bay opted to sit Rodgers for the untested Flynn, who in his second career start looked eerily similar to the MVP candidate bundled up on the Green Bay sideline in cold, snowy conditions.

Flynn outdueled Matthew Stafford, who threw for 520 yards and five touchdowns for the playoff-bound Lions, but was picked off by Sam Shields in the final minute to seal the outcome.

Calvin Johnson caught 11 passes for a Lions-record 244 yards and a touchdown, while Jordy Nelson hauled in nine passes for 162 yards and three scores for the Packers.

The loss was the 21st straight at Lambeau Field for Detroit, which will fall back into the No. 6 seed if the Falcons beat the Buccaneers later Sunday.

It was the first time in NFL history both quarterbacks threw for over 400 yards and tossed five touchdowns.