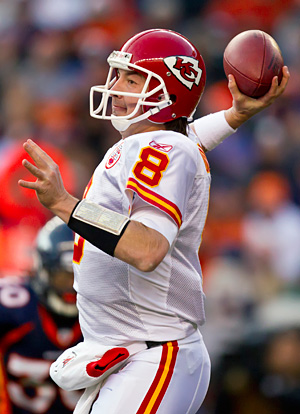 DENVER — Kyle Orton was something less than definitive about his future with the Chiefs after their season ended with Sunday’s 7-3 win over the Broncos.

But he sounded like a guy who has played his last game with the Chiefs.

“It was a long year for me,” said Orton, a veteran quarterback who began the season as Denver’s starter, was benched and eventually released and then claimed by the Chiefs after they lost Matt Cassel for the season because of a hand injury.

“I thank the Chiefs for giving me an opportunity to get a fresh start. I really enjoyed playing with those guys in the locker room. I think they’ve got a solid group of character guys. I appreciate them letting me come in and be a part of the team and finish this season on a strong note.”

Orton will be a free agent in March if he doesn’t re-sign with the Chiefs. Cassel and rookie Ricky Stanzi, who didn’t play a down this season, are also under contract.

If his time with the Chiefs is done, Orton should be remembered fondly. He took over for Tyler Palko as the starter with the Chiefs on a four-game losing streak and with Romeo Crennel having replaced the fired Todd Haley as head coach.

Orton played a part in stabilizing a teetering situation and making Crennel’s trial as the interim coach a successful one. Although the Chiefs scored just one touchdown in each of his three starts, they won two of them — with both wins coming over playoff teams.

For his part, Orton gave prospective employers, perhaps even the Chiefs, something positive to consider if he heads into free-agency. The previous entry on his work history — being benched in Denver in favor of the passing challenged Tim Tebow — wasn’t going to win him much favor.

With Sunday’s victory, he also got a measure of revenge against Tebow, Denver coach John Fox and the rest of the Broncos. Orton during the week downplayed his eagerness to show the Broncos he was a better option than Tebow but acknowledged after the game that those feelings were present.

The loss didn’t prevent the Broncos from winning the AFC West championship. At 8-8, they backed into the division title and a home playoff game against Pittsburgh next weekend when the Raiders lost to San Diego.

“It doesn’t matter how you do it,” Fox said. “Once you get into the dance, they can’t kick you out.”

The Broncos might prefer to have Orton rather than Tebow as their starting quarterback against the Steelers. After helping the Broncos take command of the division race by winning seven of his first eight starts, Tebow is now on a three-game losing streak.

He was miserable against the Chiefs, completing just six of 22 pass attempts while throwing an interception and losing a fumble.

“The three losses haven’t shaken my confidence,” Tebow said. “I’ve had to go through a lot of ups and downs in my sports career, and so I’m not going to let a few losses affect my confidence.”

Orton’s season, instead, is finished. The passing game worked well in the first half, when he completed 10 of 18 for 128 yards.

The Chiefs accomplished little in the second half after losing Bowe to a possible concussion late in the first half. Before leaving, he caught six passes for 93 yards against Denver cornerback Champ Bailey, who has shut down Bowe in previous games.

“I have a lot of respect for Champ, but (Bowe) got him turned around a couple of times and got open,” Orton said. “He got off to a great start. It was tough on us that whole second half. It’s fun when a receiver gets going like that. I have a lot of confidence in Dwayne.”