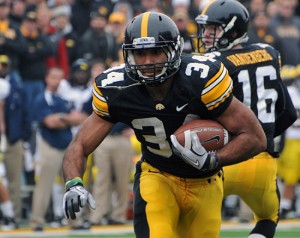 TEMPE, Ariz. — Running back Marcus Coker wants to return to the University of Iowa, a source close to the situation told The Gazette on Saturday.

Coker, the Big Ten’s second-leading rusher this season, was suspended last week from Iowa’s Insight Bowl appearance for an unspecified violation of the UI student-athlete Code of Conduct.

“Yes, the invitation is there for him to come back,” Barta said. “We’ll let this play out and see what happens.”

After a written request, Barta would consult with UI officials on whether the suspension should be modified or lifted. If “circumstances warrant a change in a suspension,” Barta would then be able to reinstate an athlete.

There is no timetable for the process.

Coker’s desire to return to Iowa at least rules out the possibility of him leaving regardless of reinstatement.

During the Insight pregame radio show, Iowa coach Kirk Ferentz said he expects Coker and freshman running back Mika’il McCall to return to the team next semester. McCall has been suspended since late November for an unspecified violation of team rules.

Ferentz said: “I do. They’re both separate situations and separate circumstances. Hope things work out positively in both cases.”