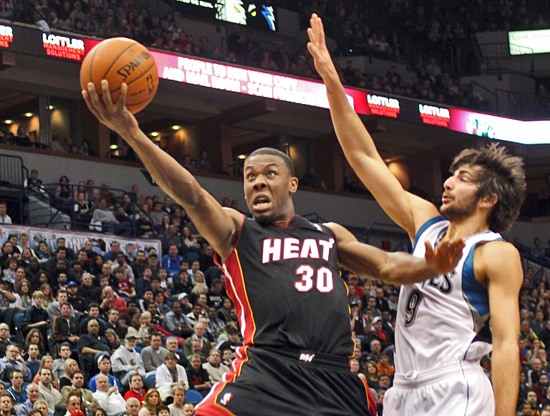 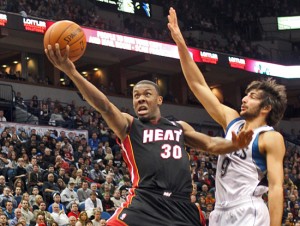 MINNEAPOLIS — Those fans who arrived to Target Center on Friday night wearing solemn black No. 6 LeBron James jerseys or fiesta-colored sombreros each got what they wanted in Miami’s tense 103-101 victory over the Minnesota Timberwolves.

Those who came to see the Heat’s big-top circus saw exactly what Wolves coach Rick Adelman predicted they would — a slam-dunk exhibition — if his team continued to throw the ball over the place, as they did again Friday to the tune of 25 turnovers.

They saw James score on fast-break alley-oop dunks and windmill slams — “Like a wide receiver,” Wolves forward Kevin Love said — before he finished the game by finding teammate Dwayne Wade with a lob pass off a set play for the eventual winning basket with 4.6 seconds left.

Those fans who gathered high in Section 121 — the ones dressed in shades of lime, orange and lemon, sporting giant ol’ sombreros and chanting “Ole, ole, ole” like they do at foreign soccer games — came to celebrate a new, exciting day in Wolves history.

Never mind that they had transported themselves to the wrong continent.

“From Spain, you know?” Wolves rookie point guard Ricky Rubio said with a smile about his homeland when asked about fans who cheered him in Mexican apparel.

Those fans saw Rubio assume command of a Wolves team and orchestrate a comeback from a 13-point first-half deficit with the kind of promise that left the Heat coach and players accusing the Wolves of something few opposing coaches have in recent years.

“I’m glad we played them early because later they’re going to be trouble,” Wade said. “Timberwolves fans are going to have something to cheer about.”

The Wolves led by five points with 7 1/2 minutes left and by three with 73 seconds left. But in the end, the Heat prevailed — and the Wolves extended their club-record losing streak to 18 games, dating to last season — because the young home team again committed too many turnovers, missed too many free throws in the crunch and simply rushed when it once again needed to be composed.

“Sooner or later you have to keep through it and give yourself a win at the end,” Adelman said. “If they stay with it, they’ll do that.”

Down the stretch, Adelman turned to Rubio and a group of reserves who outscored the Heat bench 57-21 and notably left starter Michael Beasley, who fought foul trouble all game, and three other starters on the bench for the entire fourth quarter.

Rubio responded with a 12-point, 12-assist, six-rebound performance — the first Timberwolf to reach those numbers since Sam Cassell did so in 2004 — that fueled a lineup that also included Love, Wayne Ellington, Derrick Williams and Anthony Randolph or Anthony Tolliver.

That group had the Heat reeling in those final 73 seconds, but Rubio perhaps continued to push the ball when he should have pulled his teammates. He passed ahead to Williams, who inadvertently stepped out of bounds. Then he threw a wild pass low and outside to Ellington and out of bounds.

Those two turnovers provided the Heat with the opening it needed, and James and Wade took it. First, James drove the lane and scored on a three-point play that gave the Heat a 101-100 lead with 1:08 remaining and left the Wolves’ bench screaming for a charging call.

Then with the game once again tied in the final 10 seconds, the Heat freed Wade for his second winning basket in three nights on the road when the Wolves failed to switch and cover him in time.

“We knew what was coming,” Williams said. “We were right. We just weren’t there at the right time.”