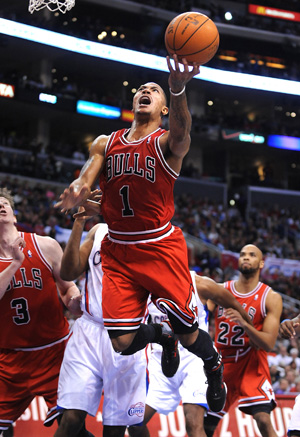 LOS ANGELES — Some Clippers home openers have featured as much sizzle as lettuce.

But even with Chauncey Billups sidelined with a strained groin, a buzz and star power filled Staples Center on Friday night. That’s what happens when a woebegone franchise turns into “Lob City” after high-profile offseason acquisitions.

(PHOTO: The Chicago Bulls’ Derrick Rose drives to the basket, drawing a foul by the Los Angeles Clippers’ Randy Foye, not pictured, at the Staples Center in Los Angeles, California, on Friday, December 20, 2011. Chicago defeated the Clippers, 114-101.)

The floor generals didn’t disappoint, deliciously dueling until the Bulls prevailed 114-101 to cap their season-opening, four-game West Coast swing at 3-1.

As the Bulls fly home Saturday for Sunday’s home opener against the Grizzlies, Rose, who scored 12 fourth-quarter points, can travel knowing he now is 5-0 in head-to-head matchups between the All-Star point guards.

“It’s not a rivalry,” Rose said. “Just go out there and play. My biggest thing is winning. I couldn’t care less about the matchup.”

Rose finished with 29 points, 16 assists and eight rebounds and might have hit double figures in highlight-producing plays. Paul posted 15 points and 13 assists for the Clippers.

The Bulls pulled away in the fourth with a 14-5 run in which Rose sank six free throws — the Bulls shot 34 — and assisted Ronnie Brewer and Luol Deng on 3-point shots. Brewer’s shot marked his seventh straight field goal over the last two games.

Rose had attempted 10 free throws in the first three games but got to the line 11 times with another aggressive effort. Rose admitted his missed free throw against the Clippers in December 2010 still haunted him, even though the Bulls avenged that loss here in February.

“I remember everything,” Rose said. “When I play I’m a quiet guy so I think of anything to get me going. I hold grudges man.”

Deng and Joakim Noah added 19 points apiece for the Bulls, who shot 50 percent and placed five scorers in double figures for the second straight night.

Matched mostly against Noah, Blake Griffin powered his way to a double-double of 34 points and 13 rebounds. His monstrous, two-handed jam just 20 seconds after tipoff kept the pregame buzz on high. At times, the crowd’s reaction made the action resemble a summer-league game.

But the Bulls again wore down an opponent with depth and offense, limiting their turnovers.

“We want to push the tempo,” coach Tom Thibodeau said. “We feel we have the personnel to run so we want to try to take advantage of that. We want to play with a faster pace.”

Few play faster than Rose, who added to his big-game status with yet another sterling performance.