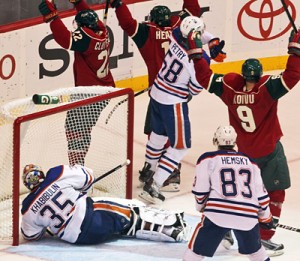 ST. PAUL, Minn. — This was, as one observer so aptly put it, big-boy hockey. The Wild and Edmonton were at Xcel Energy Center Thursday, playing for the last time this season. There were skirmishes, there were sticks to the face. There were hits made, punches thrown. And finally for the Wild, there were goals scored.

The streak is over.

An eight-game winless string in which the Wild scored just 10 goals evaporated in front of a crazy Xcel crowd with a 4-3 Wild victory that featured goals from four players and two fights between Wild winger Matt Kassian and the Oilers’ Darcy Hordichuk — Kassian dominated both.

The Wild broke a 1-1 second-period tie with goals from Jarod Palmer and Pierre-Marc Bouchard 19 seconds apart to take a two-goal lead. Niklas Backstrom improved his record vs. Edmonton to 22-3-1 overall and to 16-0-0 at home.

Intensity? Even Backstrom got into the action, whacking Ryan Jones from behind while he was busy interfering with him in the third period. It was that kind of evening.

The entertaining first period contained a succession of pushes, shoves and hits. The Wild started the period slowly, but finished it strong. At 1:24 Edmonton took a 1-0 lead when Jordan Eberle skated the puck down the right wing into the Wild zone. He drew two defenders to him, then managed to center the puck. Taylor Hall was one of two Oilers standing unmolested in front of Backstrom, and he hammered the puck home.

But slowly, the Wild got back into it, with chippy play perhaps being a motivation. Warren Peters got a point-blank chance, then Darroll Powe, then Dany Heatley. There were two coincidental minors in the period, allowing for four-on-four skates, and on the second one, the Wild broke through.

Marek Zidlicky skated into the Oilers zone and dropped the puck to Mikko Koivu, who skated from the right wall, through the circle into the slot. Then, using two Oilers players as screens, Koivu beat Nikolai Khabibulin on the glove side with a wrist shot at 13:47.

The intensity didn’t wane. Near the end of the period, Edmonton’s Theo Peckham  hit Brad Staubitz, who was bringing the puck up along the boards. Staubitz responded by depositing Peckham in his own bench as the crowd roared. Kassian and Edmonton’s Ben Eager each got 10- minute misconducts in the ensuing scrum.

And that was just the warmup for an even more entertaining second. The score was still tied 1-1 when Kyle Brodziak forced a turnover in the neutral zone. Palmer broke in on a two-on-one with Cal Clutterbuck. Palmer skated into the right circle, then beat Khabibulin high on the glove side. It was Palmer’s first NHL goal and he became the seventh native Minnesotan to score for the Wild.

Just 19 seconds later, another two-on-one resulted in a very similar goal, only this time it was Pierre-Marc Bouchard scoring glove-side.

A little more than 4 minutes laster, Edmonton pulled within 3-2 on Ladislav Smid’s goal. But Heatley knocked in a rebound of Zidlicky’s shot 46 seconds later to make it 4-2. Of course it couldn’t be easy. At 6:40, Shan Horcoff made it 4-3 with a wrist shot from the slot.

The tension rose. Both teams got scoring chances down the stretch, but Edmonton got more. Then, with 1:23 left, Justin Falk was whistled for interference. Edmonton pulled the goalie to get a two-skater advantage, but couldn’t get a goal.