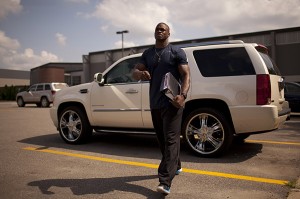 MINNEAPOLIS — Add Vikings running back Adrian Peterson to the list of elite athletes who have asked Dr. James Andrews to put them back together.

Andrews, considered the foremost orthopedic surgeon when it comes to rebuilding elbows, shoulders and knees, will operate on Peterson’s left knee on Friday at the Andrews Sports Medicine & Orthopedics Center at St. Vincent’s Medical Center in Birmingham, Ala.

Peterson, who tore the anterior cruciate and medial collateral ligaments in Saturday’s victory at Washington, will return to Minnesota on Monday. Coach Leslie Frazier said he and Peterson will discuss how much of the rehabilitation is done in Minnesota and how much is done at Peterson’s home near Houston.

Frazier clearly has a preference.

“You like for guys to be at your facility, with your doctors and your trainers and people here,” Frazier said. “But at the same time, if a guy is set up in a situation where we’d feel like the people who are working with him are qualified and doing the same type of protocol that we would have, then you’ll work with them on getting that done. But ideally, you’d like them to be at your facility.”

The Who’s Who list of athletes who have been going to Andrews the past three-plus decades is lengthy. Troy Aikman, Charles Barkley, Michael Jordan, Jack Nicklaus, Emmitt Smith, to name a few. And Drew Brees, whose career was in jeopardy back in 2005.

As for Peterson, Frazier said the two talked Thursday, “and he’s in good spirits. He’s anxious to get the surgery done and get started on his rehab.”

Job security ‘not an issue’

Frazier was asked again about his job security. Again he said, “Nothing has changed,” meaning he believes there’s no reason to believe he’s not coming back next season.

Frazier said he talks to owner Zygi Wilf every day but has not asked about his job security.

“Why would I ask that?” Frazier said with a smile. “Is there a reason why I would question that? No. No. … Not unless you don’t have confidence in what you’re doing and where you’re going and the people that you’re working for.

Asked if ownership has brought up his job security unsolicited, Frazier said, “No. We talk about now. We also talk about the future, and it’s not a question.”

Asked to be perfectly clear on whether ownership has said he’ll be back for sure, Frazier said, “I haven’t been told I’m back for sure. It never has been an issue. I’m being completely honest with you. My job security has never been an issue other than when I’m talking to (the media). That’s the truth.”

— Right guard Anthony Herrera, who missed Wednesday’s practice because of a lower back injury, practiced on a limited basis on Thursday. Frazier said he expects Herrera to play on Sunday against the Bears. Strong safety Jamarca Sanford (shoulder) also was limited on Thursday.