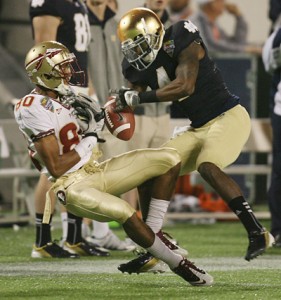 By Mike Bianchi, The Orlando Sentinel –

ORLANDO, Fla. — This was not your typical Champs Sports Bowl.

(PHOTO: Florida State wide receiver Rashad Greene (80) has the ball knocked out of his hands by Notre Dame cornerback Gary Gray during the Champs Sports Bowl at the Florida Citrus Bowl in Orlando, Florida, on Thursday, December 29, 2011. Florida State won, 18-14.)

This was not just some second-tier, pre-New Year’s Day bowl game between two nobody programs

This was a joyous journey through the past and a potential passageway way into the future.

A nostalgic look back into what once was and what could and should be again.

Buzz and electricity in the air.

Drama and excitement on the field.

Wake up the echoes (and the ticket scalpers).

“This is a great game for both schools,” Florida State legend Bobby Bowden told me in the days leading up to Thursday’s Champs Sports Bowl at the sold-out Citrus Bowl.

Bowden then reminisced about the glory days of both programs, back in 1993 when the two schools met in the regular season with Florida State ranked No. 1 and Notre Dame No. 2. The Irish won the game in the final minutes and took over the No. 1 spot with one game left. But the following Saturday, Boston College upset Notre Dame 41-39, propelling the Seminoles back into the national title picture. After much debate, Florida State – and not Notre Dame — played Nebraska for the national title, won the game 18-16 and gave Bowden the first of his two championships.

Those were the days.

But the question for both FSU and Notre Dame fans heading into the Champs Restoration Bowl was this: When will those days finally return?

When will these once-proud programs make their return to the nation’s elite?

Instead of the Seminole War Chant and the Notre Dame Victory March, the marching bands from the two schools should have combined Thursday to play Auld Lang Syne, Guy Lombardo’s New Year’s anthem.

“Should auld acquaintances be forgot,

And never brought to mind?

These auld acquaintances used to be red hot,

Now they have nine losses combined.”

Of course, you would have never known both schools have been largely irrelevant for the past decade if you just happened to walk into the Citrus Bowl Thursday. There it was in all its glory – a capacity crowd of 68,305 and the first sellout in Champs Sports Bowl history. It was 1993 all over again. The only thing missing was puka shell necklaces and Nirvana blaring in the tailgate lots.

And, just like 1993, it looked like Notre Dame was on its way to victory. The Irish were up 14-0 and FSU’s offense looked absolutely putrid. Coach Jimbo Fisher’s injury-plagued team was forced to start four freshmen on the offensive line and it showed early. FSU could not run the ball or protect quarterback EJ Manuel. The offensive linemen were so young and were playing so poorly that at one point I think I saw Fisher threaten to put them in time out and send them to bed without supper.

FSU’s offensive futility was exemplified early in the third quarter when Lamarcus Joyner returned a kickoff 77 yards. FSU next three plays were a 6-yard pass, a 1-yard run and a 15-yard sack. And somewhere, Touchdown Jesus lowered his arms and put his hands over his eyes.

Then, suddenly, FSU’s offense came alive late in the fourth quarter. Down 14-0, the Seminoles came stomping and storming back. Manuel hit Bert Reed for an 18-yard TD with 14:54 left in fourth quarter for the Seminoles’ first touchdown. Then Nigel Bradham came up with one of three FSU interceptions. And two plays later, Rashad Green hauled in a 15-yard TD pass to give the Seminoles a 15-14 lead they would never relinquish.

What an exhilarating finish to a disappointing season. It started back in August with FSU ranked No. 5 in the country and being mentioned as a national title contender.

It ended Thursday with an invigorating victory over Notre Dame in a bowl game.

No, it didn’t have the same meaning or magnitude of the FSU-Notre Dame, circa 1993.

But maybe, just maybe, it was an indication that the Seminoles are headed back to the future.