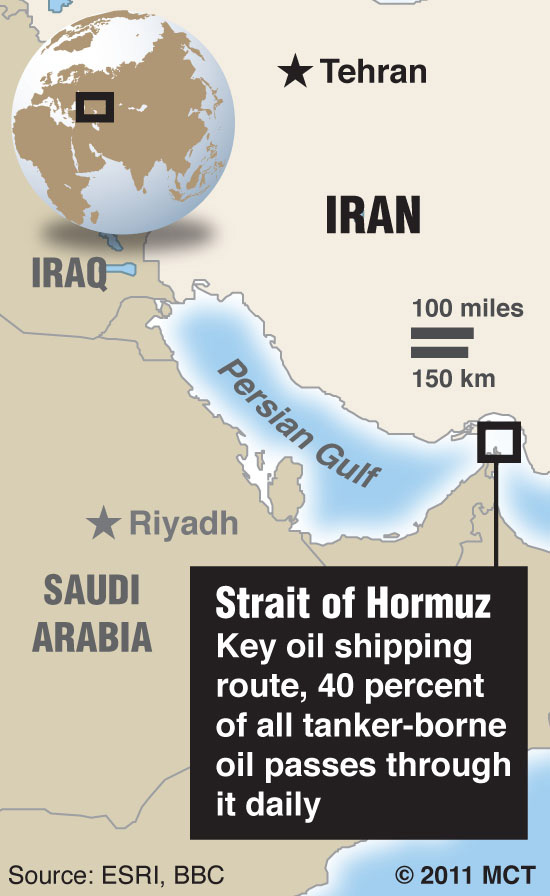 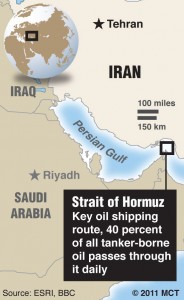 By Nancy A. Youssef and Jonathan S. Landay, McClatchy Newspapers

WASHINGTON — Amid an escalating war of words between the United States and Iran over the Strait of Hormuz, U.S. and European officials on Wednesday expressed confidence that there was no imminent threat to the passageway through which some 40 percent of the world’s seaborne oil travels daily.

(GRAPHIC: Map locating the Strait of Hormuz; Iran says it may close a vital oil-trade route if the U.S. and its allies impose more sanctions over Iran’s controversial nuclear program.)

Instead, they said, the latest Iranian threat to close the route reflected Tehran’s anger at the U.S. pledge to impose sanctions on its nuclear program that for the first time directly target Iran’s oil exports, the source of some 80 percent of its government revenue.

A European Union diplomat said that despite “a history of violating almost any international agreement,” expectations were low that Iran would blockade the waterway at the mouth of the Persian Gulf. And while such a blockade could lead to a confrontation with U.S. forces and disrupt the global economy, analysts expressed skepticism that Iran’s navy had the capacity to shut down the strait for an extended period.

Amid the tensions, the diplomat said that there was nevertheless a “pretty good prospect” that the 27-member EU, which imports some 25 percent of its petroleum supplies from Iran, will adopt an embargo on Iranian oil purchases next month.

“We are not going to let ourselves be pressured by Iranian rhetoric,” said the diplomat, who requested anonymity because of the sensitivity of the issue. He added that Saudi Arabia and other Middle East producers have agreed to make up for the losses caused by an embargo.

While some analysts were skeptical that Saudi Arabia had the capacity to make up for the shortfall, world oil markets weren’t badly rattled. In New York, benchmark crude fell slightly by $1.99 to $99.35 a barrel in midday trading. In London, Brent crude fell $2.20 to $107.07 a barrel.

The apparent trigger for the flare-up is defense funding legislation that President Barack Obama is preparing to sign, which contains a provision that would allow the U.S. for the first time to penalize foreign banks that do business with Iran’s Central Bank, the main conduit for payments for Iranian oil.

The provision would substantially expand existing U.S. sanctions against Tehran. It is aimed at restricting funds for Iran’s nuclear program, which the U.N. International Atomic Energy Agency last month reported may be secretly developing a nuclear warhead for a ballistic missile. Iran insists that its nuclear program is for peaceful purposes.

The tensions began Tuesday when Iran’s vice president, Mohammad Reza-Rahimi, said that if the West imposed sanctions on Iran’s oil exports, “then even one drop of oil cannot flow from the Strait of Hormuz.”

That prompted a response from the U.S. 5th Fleet, based in the Persian Gulf nation of Bahrain, which said it was prepared to defend the key passageway, through which about 15 million barrels of oil pass daily.

“The free flow of goods and services through the Strait of Hormuz is vital to regional and global prosperity,” U.S. Navy Lt. Rebecca Rebarich said in a statement. “Anyone who threatens to disrupt freedom of navigation in an international strait is clearly outside the community of nations; any disruption will not be tolerated.”

At the Pentagon, officials said they were confident the U.S. Navy had adequate resources in the region to defend against any potential Iranian threat.

Analysts and Pentagon officials said that Iran could employ numerous tactics in the narrow strait, which connects the Persian Gulf to the Gulf of Oman.

A naval blockade is unlikely, as it would be considered an act of war by Iran against a far better U.S. naval fleet. Iran spends roughly $8 billion on its military compared with nearly $700 billion slated for next year’s U.S. defense budget.

But Iran could employ less direct tactics such as placing mines in the strait — which the United States would have to search for to disarm, a laborious process that could expose American ships to Iranian attack. Iran also could use surface craft to harass oil tankers.

Moreover, Iran could respond to any confrontation with the United States through terrorist attacks on U.S. and other targets through its proxies, including Hezbollah, the militant Shiite Muslim movement that controls the government of Lebanon.

Micah Zenko, an expert with the Council on Foreign Relations, said that there’s no scenario for which the U.S. Navy’s regional command has done more contingency planning than clearing an Iranian blockade of the passageway because of its importance to global commerce.

“Iran simply could not close the Strait of Hormuz for any length of time,” Zenko said.

Yet a U.S. operation to clear the strait would risk a military confrontation that would for some time seriously disrupt world oil supplies — 90 percent of Persian Gulf oil is shipped through the strait — and wreak havoc on the international economy.

“The notion that Iran could truly blockade the strait is wrong — but so too is the notion that U.S. operations in response to any Iranian action in the area would be short and simple,” Caitlan Talmadge wrote in 2008 in the publication International Security.

“It could take many weeks, even months, to restore the full flow of international commerce, and more time still for the oil markets to be convinced that stability had returned,” Talmadge wrote.

Zenko noted that Iranian officials have threatened for different reasons to blockade the Strait of Hormuz every year since 1980, but have never actually done so, although Iran did attack shipping in the western Persian Gulf during the 1980-88 war with Iraq.