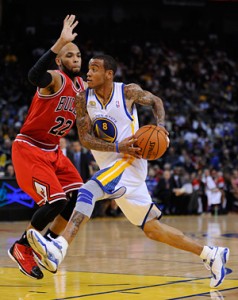 OAKLAND, Calif. — The only late-game drama that unfolded Monday night at Oracle Arena was whether the Bulls would commit the most turnovers in the Tom Thibodeau era.

One night after their dramatic victory over the Lakers, the Bulls were sloppy from the start and careless throughout in a dismal 99-91 loss to the Warriors.

Turning it over on their first two possessions and three of the first five, the Bulls committed 20 miscues overall to help hand Mark Jackson his first victory as Warriors coach. Golden State scored 22 points off the Bulls’ turnovers, 14 of which came in the first half.

The Bulls committed 24 turnovers in their Christmas Day loss to the Knicks last season to set the high-water — or low-water — mark of Thibodeau’s short reign. Maybe it’s holiday hangover.

Whatever it is, it needs to be corrected soon and continues a disturbing trend at this arena. Last season, Derrick Rose turned it over a then-career-high nine times in another loss here.

Rose had three turnovers Monday. Luol Deng and Taj Gibson “led” the Bulls with four each.

The miscues ran the gamut from physical to mental. C.J. Watson got stripped cleanly by Kwame Brown of all people while trying to initiate offense. Luol Deng, who otherwise played well with a team-high 22 points, changed pivot feet to travel while isolated up top.

“(Ellis) and Curry are a tough combination,” Thibodeau said.

Richard Hamilton avoided foul trouble and displayed an aggressive mindset early, scoring all 10 of his points in the first half. But neither he nor Carlos Boozer played the final 16 minutes, 32 seconds as Thibodeau rode a smaller lineup featuring Rose and Watson matched against Curry and Ellis.

Watson, who finished with 13 points, heated up in the fourth, sinking three 3-pointers to pull the Bulls within 89-79. But squaring up a wide-open opportunity in which he even had time to dribble, Watson missed and Ellis scored at the other end.

Rose scored 13 points on 4-for-17 shooting, in sharp contrast to his late-game heroics against the Lakers.

For a player who once hit a game-winning shot to deliver Simeon High School a state championship, Rose took his share of hits for late-game misses during his first two NBA seasons.

That changed last season when, according to the website 82games.com, Rose finished second behind Kobe Bryant in clutch statistics — defined by producing in the fourth quarter or overtime with less than 5 minutes left and neither team ahead by more than five points.

“He has the courage to take (shots),” Thibodeau said before Monday’s game. “He makes things happen. He never quits, has a lot of mental and physical toughness. At the end, he shows great resolve.”

No late-game heroics were required Monday night. The Bulls turned that chance over well before the fourth quarter.