Despite loss to Thunder, newcomers Rubio and Williams give Timberwolves a spark 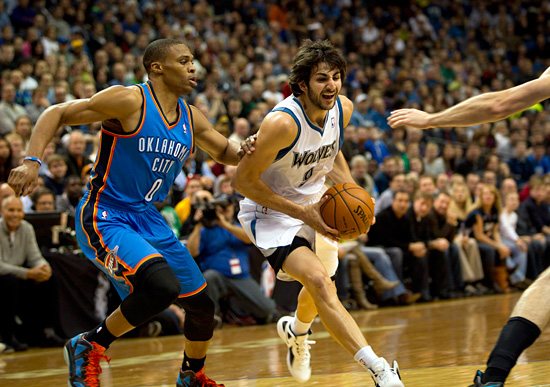 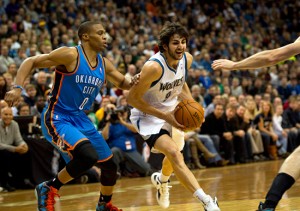 MINNEAPOLIS — The Timberwolves bade farewell to their overtime lockout summer and, on the day after Christmas, greeted the future with Monday night’s season-opening 104-100 loss to Oklahoma City at Target Center.

The result was the same as 65 others last season, but the palpable buzz in the building, from opening tap to last-second gasp, was only one reason why this felt, in All-Star forward Kevin Love’s words, “completely different” from so many other nights just a year ago.

For another, the Wolves finished the game with a unit on the floor — Rubio and the newly signed J.J. Barea in the backcourt, Love, Williams and Michael Beasley up front — that slugged with the Western Conference finalist Thunder toe-to-toe until the final three seconds. 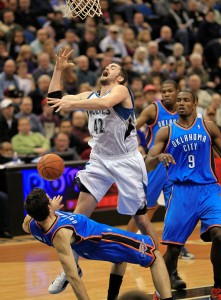 (PHOTO: The Minnesota Timberwolves’ Kevin Love (42) gets fouled by Oklahoma City Thunder defender Nick Collison during the third quarter at the Target Center in Minneapolis, Minnesota, Monday, December 26, 2011. The Thunder defeated the Timberwolves, 104-100.)

That’s when, with Oklahoma City leading 102-100, Beasley took the ball hard to the basket for what would have been a tying score over Kendrick Perkins, only to come away with nothing, although Beasley’s facial expressions and body language indicated he was expecting a foul call that never came.

“If the ref ain’t called it, then I didn’t get fouled,” Beasley said afterward.

The Wolves brought themselves back from a 12-point, third-quarter deficit with Rubio leading them, orchestrating both the fast break with precise bounce passes to cutting teammates and his team’s comeback by playing the game’s final 15 minutes.

Rubio, Williams and Barea played the entire fourth quarter, a quarter in which the Wolves trailed by as many as six points and led by a point three times but ultimately had no final answer for the Thunder’s All-Star tag team of Kevin Durant and Russell Westbrook.

Durant, the league’s two-time defending scoring champ, got his 33 points, 29 of them in the first three quarters.

Westbrook delivered a 28-point, six-assist, six-rebound performance that included an important three-point play down the stretch just when the Wolves had threatened to take a three-point lead.

“It’s disappointing,” Adelman said afterward. “But if we just keep our heads up …”

The Wolves made only three of 22 three-point attempts, yet they still were in the game until that final play on a night when Beasley led them in scoring with 24 points but needed 27 shots to get them and when Love provided another of his double-doubles with 22 points and 12 rebounds.

“We didn’t play our best game and we still had them down to the last minute,” Love said. “We’re happy with how things went. Obviously, we would have felt better with a win, but we just had a good feeling in the locker room after the game. We just said if we can play like that and give a good effort like that night in and night out, we can win a lot of ballgames.”

That standing-room-only crowd also seemed to go home buzzing about Rubio’s court vision; about that little backcourt with him and Barea that caused Oklahoma City’s formidable defense problems with their pick-and-roll plays; and with that small frontcourt that caused matchup problems, even if Beasley, Love and Williams combined to shoot 1-for-10 on three-pointers.

“We can take a lot of good things away from it,” Beasley said. “That’s one of the best teams in the league, if the not the best.”

The Thunder has had its core group together for three seasons. The Wolves had two weeks of training camp to integrate Adelman’s philosophies with newcomers Rubio, Williams and Barea.

“It was a great start for this team,” Barea said. “This game is going to give us a lot of confidence. If we play like that every night, we’re going to give ourselves a chance to win. If we keep playing like that, it’s going to be fun.”