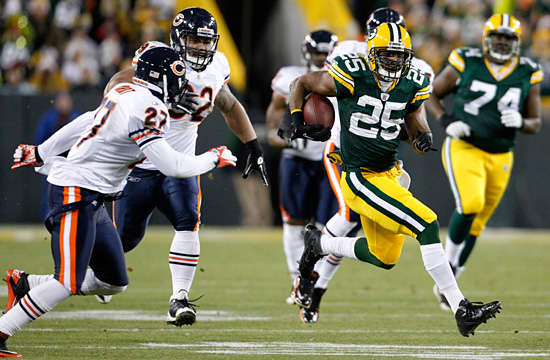 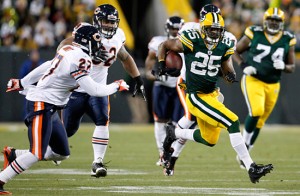 GREEN BAY, Wis. — At 14-1, the Green Bay Packers are imperfect both in record and in form, not quite the team that roars into the postseason with a string of dominant performances to back up its status as owner of home-field advantage throughout the playoffs.

(PHOTO: Green Bay Packers running back Ryan Grant (25) picks up 32 yards on a reception during the first quarter against the Chicago Bears at Lambeau Field in Green Bay, Wisconsin, Sunday, December 25, 2011. ThePackers beat the Bears, 35-21.)

A year ago, after the Packers squeaked into the playoffs with a victory against the same division rivals they knocked off Sunday night, they were considered “dangerous,” a team you did not want coming into your house in the postseason.

This year, the Packers are respected for their impressive record, but some people are having a very easy time picking them apart the flaws that reared their ugly heads Sunday in a 35-21 victory over the Chicago Bears at Lambeau Field.

In an imperfect season, the Packers are close to finding out the truth about themselves.

“I think every team has flaws, it’s just a matter of managing them,” linebacker Clay Matthews said after the Packers pulled away with 21 second-half points. “Last year we came on strong after the Detroit game and played two great games to finish the season.

“There’s always room for critics to kind of bring you down and let everybody know you are beatable. The good thing is it’s not the attitude of the players in this locker room. We know what we can do, and it’s led to a 14-1 record. I think that speaks for itself.”

Some other numbers that speak for themselves are 199 and 441, which are the yards the defense allowed on the ground and overall, respectively, against a Bears team starting third-stringers at quarterback and running back. Another is zero sacks.

Offensively, the Packers started the game looking more like the team that was stuck in neutral in Kansas City last week than the one that bombarded the Oakland Raiders and New York Giants to the tune of 84 points and 840 yards.

“Every game we’ve played in there have been some areas where we have to improve,” center Scott Wells said. “Tonight was no different. We didn’t extend some drives that we wish we would have early. There’s a lot of areas of emphasis that we’re improving in.

“The key is to make those improvements week to week.”

The Packers clinched home-field advantage because they have a two-game lead over San Francisco and New Orleans with one game to go. That means they will not only have a bye in the wild-card round, they also will not have to play on the road as long as they’re still in the playoffs.

There have been targets on the Packers’ backs all season and until the Chiefs game they had responded perfectly to the pressure. But that loss also created a dent in an aura of invincibility and showed the rest of the NFL that they’re not always good enough to overcome their weaknesses.

There’s undoubtedly a faction of football followers who think the Packers are ripe for the taking.

“I think we’re a team that has 14 wins out of 15 games, and that says a lot in itself,” fullback John Kuhn said. “You can look at stats and say whatever you want, but right now we’re a team that won more games than they lost.

“We’ve got home-field advantage throughout the playoffs and all our goals are still ahead of us. If we reach all our goals, I’m sure everybody will have nice things to say about us.”

Packers coach Mike McCarthy wasn’t holding back his celebratory mood after his team set a franchise record for most victories in a regular season, but he also seemed unwilling to brush over a defensive performance pretty much on par with those throughout the season.

If the Bears can roll up 441 yards with Josh McCown, a quarterback who was coaching high school football a little more than a month ago, imagine what the Detroit Lions or New Orleans Saints can do if they come into Lambeau Field in a few weeks.

“We won big,” McCarthy said. “That’s the bottom line. Just like I told the team at halftime, the scoreboard looked the way it needed to look, 14-3, but the time of possession and the number of attempts, and the ability to produce yardage against our defense, we needed to get that flipped.

“That’s definitely something that will be graded and fixed.”

McCarthy wasn’t specific on how he would handle the regular-season finale against Detroit next week at Lambeau Field, but one thing he can’t risk is more injuries.

The Packers’ uneven performance Sunday can be blamed on defensive end Ryan Pickett sitting out with a concussion or left guard T.J. Lang having to play for injured right tackle Bryan Bulaga or backup Evan Dietrich-Smith having to play left guard for Lang or wide receiver Greg Jennings on the sideline with a sprained knee.

This is probably the most the team has been banged up all season.

But that wasn’t an excuse last year when the Packers had almost enough players on injured reserve to play an 11-on-11 game in the training room. They will have time they didn’t have a year ago to get healthy, but they probably won’t go into the playoffs with the momentum they had a year ago.

“You think about it, last year we had to go on the road and play every game, and we played in domes,” cornerback Tramon Williams said. “We went into some tough environments. Now you have dome teams that might have to come out to Lambeau.

“That’s a totally different environment. Hopefully, the Lambeau advantage speaks as it does and we come out and play like we’re capable of playing.”