James and Wade power Heat past Mavericks in opener 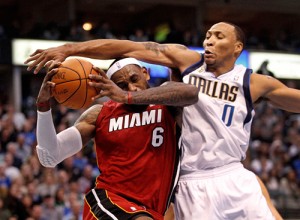 DALLAS — That victory the Miami Heat were looking for last June in Dallas? They found it Sunday.

That additional element to make the game easier? They apparently have found that, as well.

Doing to the Dallas Mavericks’ championship celebration what the Mavericks did to their 2011 championship hopes, the Heat got the best of LeBron James and Dwyane Wade to roll to a 105-94 season-opening Christmas Day rout Sunday at American Airlines Center.

“It was a good, business, professional win for us tonight to get this thing started,” coach Erik Spoelstra said. “We understand this is going to be a wild journey.”

In a game played at a decidedly non-playoff pace, the Heat raced to a 28-6 edge in fastbreak points at one stage, pushed their lead to 35 by the opening minutes of the third quarter and made just about every Maverick but Dirk Nowitzki disappear until the game was out of reach.

“We tried to play aggressive,” James said. “We’re an aggressive team. I put as much pressure on the defense as I can.”

A too-little-too-late rally allowed Dallas to make it respectable late, but by then the Heat likely had turned their focus to Tuesday’s home opener at AmericanAirlines Arena against the Boston Celtics.

No, these were not the same Mavericks who overcame a 2-1 series deficit to vanquish the Heat in six games in the 2011 NBA Finals. Gone were Tyson Chandler and his rebounding and shot-blocking deterrence, J.J. Barea and his chaos-creating speed and DeShawn Stevenson and his big-talk defense against James.

The replacements? Well, put it this way, Vince Carter started at shooting guard for the Mavericks and then watched the start of the second half from the bench, while Lamar Odom was ejected for a pair of technical fouls with 5:06 to play in the third quarter for arguing a foul call, closing with four points on 1-of-6 shooting and four rebounds in his Dallas debut.

These also were not the same Heat. Well, actually they were in name, with Spoelstra opening with the same lineup he closed Game 6 of the Finals with, namely James, Wade, Chris Bosh, Mario Chalmers and Joel Anthony. In terms of style, this was a newly caffeinated version, a team playing at speed whenever possible.

“At times,” Spoelstra said, “we were able to really be aggressive in the open court.”

That speed got a boost when Chalmers got into quick foul trouble. That got first-round pick Norris Cole into the game early, and the point guard out of Cleveland State instantly turned up the electricity on both ends with his energy.

But it was more than that. It was Udonis Haslem delivering the energy off the bench that he couldn’t deliver in the 2011 Finals because of a lingering foot injury. It was James Jones draining the 3-pointers he never got the opportunity to take in the Finals, with Spoelstra having removed him from that rotation. It was Juwan Howard making old the new young.

And it was James and Wade going into the post to create the type of easy halfcourt points the Heat lacked in last season’s NBA Finals.

“The biggest thing for us,” Wade said, “is not to rely on jump shots when we need baskets.”

There were a few uneven moments late, but this was nothing like the 15-point lead the Heat blew in the fourth quarter of Game 2 of last season’s NBA Finals.

Yet though it all, there was a respect for what Dallas accomplished last season, even as the Heat remained back by the locker room while the 2011 championship banner was raised to the rafters.

“We tried to do it respectfully,” Spoelstra said of keeping his team out of view during the ceremony. “It was their night.”

Six months after the fact, the Heat got back at the Mavericks, their first regular-season victory against the Mavericks in 15 meetings, Wade’s first in Dallas.

But they didn’t get even. They know that opportunity only comes in June, after what will be a grueling sprint of a lockout-shortened season.

The wait for basketball ended Sunday. After six months away from the game, the Heat came back anew, and improved.