GOP hopefuls poised to go ‘back to war’ 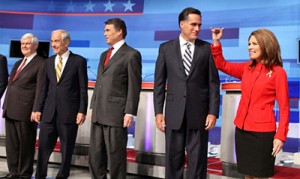 After a silent-night Christmas cease-fire, GOP presidential hopefuls are expected to launch an -all-out political artillery barrage in the final days before the Jan. 3 Iowa caucuses, experts predicted.

“The gloves will come off probably Tuesday,” said Republican strategist Todd Domke. “The campaigns generally give people one day after Christmas to -enjoy the peace and joy of the holidays  then it’s back to war.”

Well-positioned Ron Paul may have the diehard activists needed to pack the caucuses in Iowa’s libraries and school gyms, but a win by the libertarian-leaning isolationist Paul there next week may scare GOP loyalists into Gov. Mitt Romney’s corner in New Hampshire a week later, said Republican strategist Patrick Griffin.

“There’s no one in the Democratic or Republican party with any credibility that believes Ron Paul could ever be nominated, much less be president of the United States,” Griffin said. “It may just knock the party back to the establishment  and Romney is the establishment.

But Instapundit’s Glenn Reynolds sees an outright Romney victory in Iowa, despite Romney’s strategy of downplaying Iowa in -favor of New Hampshire.

“People call him robotic, but he’s like the Terminator,” Reynolds said about Romney. “No matter what you do, he can’t be stopped. He just keeps coming after you.”

Reynolds predicted an eventual Romney-Gingrich ticket, citing the former House speaker’s ability to rile up the party and lob bombs.

“The risk is he’ll say something dumb,” Reynolds said about Gingrich. “But when you’re opposite Joe Biden, you’re kind of insulated against saying dumb stuff.”

A Romney win in Iowa might surprise people  mainly because he’s been so effective at publicly lowering expectations in that state, while operating a -full-on advertising and field organizing campaign behind the scenes, Domke said.

“They’re trying to have it both ways,” he said.

That means even a second-place finish could be good enough before heading to the more Romney-friendly Granite State.

“Some of the evangelical groups and key individuals have started to coalesce around him as the best of the remaining alternatives,” Sabato said. “They just think Michele Bachmann is finished and they don’t think Rick Perry has gained traction.”