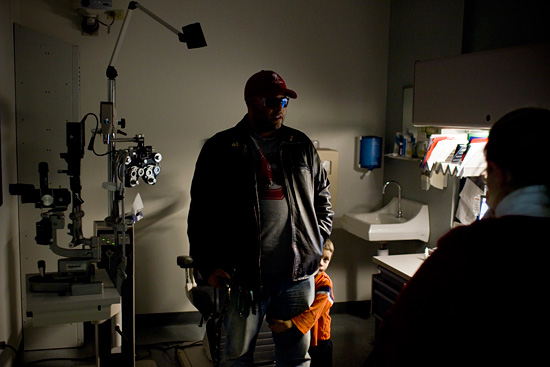 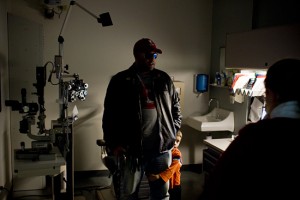 CHICAGO — It was just after midnight when former Marine Cpl. James Dahan was awakened by a faint noise in the distance.

Except for the glare of his flashlight, there was darkness all around as he crept from room to room, searching for an unknown enemy.

(PHOTO: James Dahan, of Lisle, center, stands with his son, Kalel, 4, after going through an eye exam at the Edward Hines, Jr. VA Hospital in Hines, Illinois, December 14, 2011. Dahan, a Marine, was exposed to over 30 improvised explosive devices while in Iraq and suffers from mild traumatic brain injuries and post-traumatic stress disorder. Along with that comes headaches and vision problems that has changed his everyday life. )

Yet with people pacing about upstairs, voices he did not recognize billowing through the walls and the incessant roar of traffic outside, he dared not fall asleep. So he stayed up all night repeating the routine over and over again.

Dahan returned from Iraq seven years ago. But the horrors of war followed him home.

On that night last month, there had been a power outage at his apartment in Lisle, Ill., unleashing memories of the war zone. He stood guard over his sleeping son, while the noises of his neighbors moving about kept Dahan on edge.

The enemy existed only in his mind.

The last convoy of U.S. troops left Iraq last Sunday, but for thousands of veterans who suffer from post-traumatic stress disorder, the haunting memories might never go away. Since the Iraq and Afghanistan wars began a decade ago, the U.S. Veterans Administration has treated more than 212,000 combat veterans for PTSD, an anxiety disorder resulting from traumatic events during war.

More than 2,200 Iraq-era cases of PTSD are being treated in Illinois, in addition to more than 400 cases of traumatic brain injury (TBI), a medical condition caused by head trauma.

The costs are high. According to a report by Harvard University professor Linda Bilmes, who has spent years tracking money spent in the war on terror, the long-term costs of caring for the nation’s wounded veterans could cost $201 billion to $348 billion over the next 40 years, plus $355 billion to $534 billion in disability payments.

The influx of more than 9,000 new patients at Edward Hines Jr., VA Hospital in Maywood has required officials to hire additional staff to provide timely services and develop new techniques for treating these young troops, many of whom deployed multiple times.

“If you think about what their daily life was like in Iraq, fearing these bombs and blasts that occur almost daily, it is unlikely they haven’t experienced some kind of trauma,” said Dr. Bruce Roberts, chief of mental health services at Hines.

Though the number of Iraq-era veterans treated for PTSD is only a fraction of those from the Vietnam era, their experiences are different, veteran advocates said, because troops constantly risked attack.

“The multiple deployments and the type of attacks from the enemy are not the traditional types seen in the past with clearly defined battlefields,” said Steve Nardizzi, executive director of the Wounded Warrior Project, a group formed to support service members injured in Iraq and Afghanistan.

“There is no entering the battlefield and retreating to a safe environment. At any given time and any given moment, the street you are driving down might have an IED (improvised explosive devise), or someone shooting at you or someone walking up with a hand-held grenade.”

Experts said getting veterans into counseling is difficult because admitting a mental disorder is often viewed as a weakness, especially for troops who are taught to be fearless. But often, according to counselors, their eyes tell the true story.

“There seems to be a consistent recurring pattern where guys will come home from deployment and they’re still in a war zone, they are on a constant state of readiness and hyper-alert, and it’s hard to come down from that,” said Capt. Scott Andrews, an Illinois National Guard chaplain who counsels troops. “But you can always look in their eyes and see when they’re not sleeping.”

Some veterans have thrived despite their physical and mental injuries, finding new ways to channel their energy by climbing mountains, public speaking or mentoring other wounded troops. But the majority of those with PTSD or brain injuries suffer silently.

They enroll in college, but find it difficult to concentrate on their school work. They return to wives and children, but often those relations falter under the stress. They drive too fast or drink too much in an attempt to replicate the adrenaline rush they felt in the war zone. Sometimes, they sink into drug addiction. Sometimes they take their own lives.

Three months after arriving in Iraq, Dahan stepped on a train track and broke his foot while running to the aid of a sister platoon that was under fire. The injury was misdiagnosed as a sprained ankle, and he continued to re-fracture it in Iraq. When he came home, he required reconstructive surgery and was diagnosed with TBI.

During his nine-month deployment in 2004, Dahan said, he was exposed to multiple IEDs that detonated within 30 feet of his vehicle. Now 29, he lives with debilitating headaches, flashbacks, nightmares and a constantly hovering fear that danger lurks around every corner.

When Dahan is sleeping his wife, Erin, 31, and their three children know better than to run in and awaken him by jumping on the bed. Startling noises can set him off and leave him stressed for days. So the family knocks gently on the bedroom door or calls him on his cell phone.

He now attends Benedictine University in Lisle and works with other veterans through the Wounded Warrior Project.

“You don’t go into a war like this and come out unscathed,” said Dahan, whose injuries damaged his eyesight and left him with a limp. “We’re not going into shopping malls and blowing people away, but we are portrayed that way.”

In previous wars, many troops would have died from their injuries, but stronger body armor, advances in medical services on the battlefield and improved armored vehicles have saved lives.

In some cases, however, outreach services are lacking, causing many veterans in need of mental health services to fall through the cracks, according to Nardizzi. Large cities such as Chicago offer a range of services in a timely manner, but that is not the case in rural areas.

Sgt. Robert James, 39, of Matteson, was misdiagnosed twice before doctors realized that the dizziness, headaches and memory loss were not vertigo but TBI. As a medic with the Illinois National Guard, James was under constant attack during two his deployments to Iraq. He never addressed his own injuries until one day his head was spinning so badly he couldn’t get up.

His injuries have taken a toll on his wife and three children. They don’t go to large family gatherings, restaurants or parks because crowds make James uncomfortable. If the children want something, they know to go to their mother, Rachel, 39, a sergeant in the U.S. Army Reserve who is attending nursing school so she can better care for her husband.

Most people, James said, feel uncomfortable around veterans like him.

“A lot of civilians don’t understand what people like me are going through,” said James, who has a service dog to relieve stress. “The biggest obstacle is seeing friends shy away from me, people I used to hang out with and talk to, because either they are afraid or they don’t want to associate with this ‘crazy person.’ ”