Eagles beat Cowboys, but only after being eliminated from playoffs 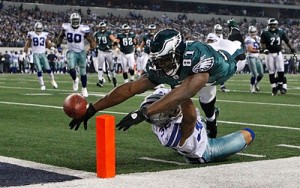 By Jonathan Tamari, The Philadelphia Inquirer

ARLINGTON, Texas — The Philadelphia Eagles had the lead, but they were out of the playoffs.

Michael Vick found Brent Celek for a touchdown on the game’s opening drive Saturday, giving the Eagles a 7-0 advantage, but in New Jersey their faint playoff hopes flickered and were ultimately extinguished. As the Eagles and Cowboys played their first quarter, the Giants beat the Jets, eliminating Andy Reid’s team from playoff contention.

(PHOTO: Philadelphia Eagles wide receiver Jason Avant looses control of the ball before he could get it over the goal line during the game against the Dallas Cowboys at Cowboys Stadium in Arlington, Texas, Saturday, December 24, 2011. The Eagles defeated the Cowboys, 20-7. )

The Cowboys and Giants will now play next Sunday night with the NFC East title on the line. The Eagles, who won the division a year ago and hoped for even better results this season after a summer influx of talent, can now do no better than an 8-8 record after winning, 20-7, on Saturday. They had opened the year with championship aspirations.

“You can sit up there and try to make all the excuses in the world, but they don’t mean anything. At the end of the season, when you look at our final record, when it goes down in the books, it’s not going to be asterisked,” said defensive tackle Cullen Jenkins. “We’ve got to own up to it. Own up to that we let a lot of opportunities slip and get away from us early. The only thing we can do now is control what we do in the future.”

The defense has turned in three strong games — all against suspect quarterbacks — but defensive coordinator Juan Castillo admitted that it provides little solace.

“Warriors get the job done no matter what, and the job was to get to the playoffs,” he said.

Many Eagles, though, were surprisingly upbeat for having just been eliminated from postseason contention. They pointed to their win and opportunity to go .500, and to the team’s strong division record. They talked about things coming together late in the year and perhaps building for next season. They said they would have been dangerous in the playoffs.

But they were far too inconsistent and slow out of the gate to reach that goal.

Saturday’s win gave the Eagles their first three-game winning streak of the season. The victory came with Dallas resting key players. The Cowboys pulled quarterback Tony Romo after he suffered an early hand injury and sat down running back Felix Jones, who is nursing a hamstring problem, after the Giants finished their win, erasing most of the game’s playoff implications for Dallas. Win or lose Saturday, the Cowboys would need to beat the Giants on New Year’s Day to clinch the division.

So the game took on a preseason feel. The Eagles defense stymied backup quarterback Stephen McGee. The offense scored early but managed just 102 yards and two field goals in the second half.

At kickoff, the Eagles still had hope. The Giants led by 20-7, but the Jets got a touchdown and pulled within one score. But then the Giants took over, and the Eagles were finished. Some players saw the final score on the massive screens at Cowboys Stadium. Others assumed the Giants had won when Romo came out of the game.

“I will admit it was a bit of a letdown,” Vick said.

While the Eagles were officially eliminated by the Giants win, the reality is that a season full of missed opportunities and bad judgments led to the disappointing result. The Eagles blew five fourth-quarter leads. They started with linebackers and a defensive coordinator who were learning on the job. They have a league-high 36 turnovers that canceled out their offensive potency.

“We’re coming together as a team right now. We’re healthy, and obviously guys are playing good, aggressive football,” said coach Andy Reid. “As a head coach, I’ve got to make sure we get that part sooner than later. Things needed to happen sooner than the last (few) games from my standpoint.”

“We had a lot of new guys, new system, new coach on defense, new players,” Vick said. “ … I know what it takes to win football games, and I know what type of team and what type of personality and character that you have to have. And we just lacked that early. That’s the truth.”

Team president Joe Banner likely won’t speak to reporters until after the Eagles’ season wraps up next Sunday in Philadelphia against the Redskins. Following that game, the Eagles’ front office and coaching staff will have significant decisions to make, beginning with the fates of Reid — whose odds of returning seem to be strong with three straight wins — and Castillo. The team will have to decide how to handle wide receiver DeSean Jackson, whose contract is set to expire, and will probably work to clear their logjam at cornerback.

Several Eagles said they wanted to get another NFC East win to finish at 8-8.

“We want to go out there and win, finish 5-1 in the division, let everyone know that we were the dominant team in this division,” said wide receiver Jeremy Maclin. “That’s something that’s still out there to play for.”

A 5-1 mark in the NFC East would normally assure the Eagles of a playoff berth. But nothing this season has gone to plan, most significantly the way it will end.