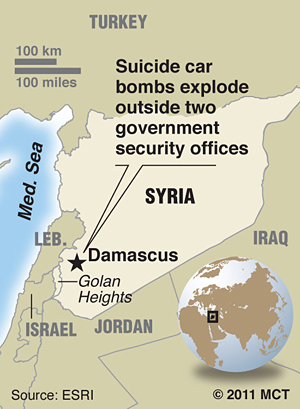 The attacks came the day after the arrival of an advance team from the Arab League to prepare for an observer mission to determine whether Syria is fulfilling its commitment to end a bloody crackdown against dissent.

Syrian officials took the team to visit the sites and said the bombings confirmed their contention that armed terrorists were behind nine months of unrest in the country, state television reported.

The official Syrian Arab News Agency said the attacks, carried out by two suicide car bombers, targeted the State Security Directorate and an intelligence building in the upscale Kfar Sousa district. If true, it would be the first such attacks since the start of an uprising against President Bashar Assad in March.

There was no immediate claim of responsibility, but SANA said: “Preliminary investigations indicated that the criminal attack carries the blueprints of al-Qaida.”

State television broadcast footage of mangled bodies, charred cars and rubble-strewn streets. Most of the victims, it said, were civilians.

The United Nations has accused Syria of gross human rights violations, saying more than 5,000 people have been killed since the start of major anti-government protests in March. The violence has escalated in recent months as a growing number of military defectors turn their guns against Assad’s regime.

Assad’s government disputes the U.N. figures and says 2,000 security force members have been killed by what it describes as Islamist militants and foreign-backed armed gangs.

Under mounting international pressure, Syria last month signed a league-negotiated peace plan calling on the government to withdraw security forces from the streets, release political prisoners and begin a dialogue with its opponents. But it did not agree to admit observers to monitor implementation of the plan until this week.

The first 30 observers are expected to arrive this weekend and will grow in number to about 150 by the end of December, according to the 22-member regional bloc.

Opposition activists accuse the government of buying time and are skeptical that the league’s observers will gain access to areas where they say the violence continues. They called for demonstrations Friday under the theme, “Protocol of death, a license to kill,” a reference to the document setting terms for the observer mission, which Syria signed Monday.