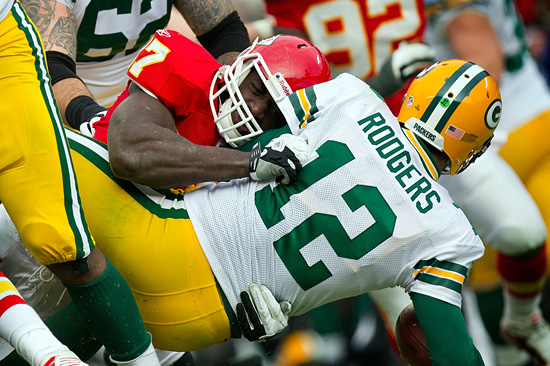 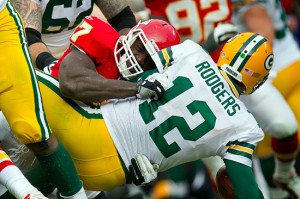 KANSAS CITY, Mo. — The opinion of at least one constituency on what the Chiefs should do with their head coaching position was heard loud and clear Sunday at Arrowhead Stadium.

Toward the end of the 19-14 win over Green Bay, players doused interim coach Romeo Crennel with a Gatorade bath. In the locker room afterward, they belted joyous chants of “Rom-e-o.’’

Most of all, the Chiefs voted with the way they played. In their first game under Crennel, the Chiefs did something no other team has done this season, which is to beat the Packers. In various corners of the locker room, the Chiefs were quick to credit Crennel for holding the operation together in a most tumultuous week.

“You (saw) what happened on the field,’’ wide receiver Steve Breaston said. “A lot of things could have went against us. People could have gone into the tank. He kept us together. He told us to stick together.

He believed we were going to come out here and win.’’

Crennel couldn’t have made a more impressive debut. The Chiefs after last week’s 37-10 loss to the Jets fired coach Todd Haley, leaving Crennel in just a few short days to pick up the pieces. His task was to beat the Packers, who were 13-0 and heading toward a perfect season.

The fact he did can only help his candidacy toward the permanent position.

“I really have no way of knowing that,’’ Crennel said. “We’ll see what the next two weeks bring because every week is a different week in the NFL. Then, at the end of it . . . we’ll let the chips fall where they may.’’

In firing Haley, the Chiefs gave the uneven performances in this season’s games as a reason. In beating the Packers, the played about as evenly as possible. They followed Crennel’s plan almost perfectly. They ran the ball effectively to run the clock and keep the ball away from the high-scoring Packers. They pressured Green Bay quarterback Aaron Rodgers most of the afternoon to get him out of his comfort zone.

They didn’t commit a turnover for the first time since an early October win over Minnesota as the quarterback Crennel installed this week as a starter, Kyle Orton, played a flawless game.

While the Chiefs appeared to still be playing with maximum effort for Haley, their work wasn’t always focused. They committed 81 yards of penalties on a New York touchdown drive last week, suggesting their minds weren’t completely dedicated to the cause. Most everything was on point Sunday. The Chiefs had to kick four field goals because the offense repeatedly bogged down inside the Green Bay 20 but they had little else of substance to complain about.

The Chiefs played with a confidence they hadn’t shown in recent weeks. They dominated the first half but led only 6-0 at halftime. They fell behind 7-6 in the third quarter and then it looked like things would start to fall to predicted form. The Chiefs opened a 12-point lead in the fourth quarter but the Packers quickly scored to slice the lead to five points. But the Chiefs never buckled and were able to run out the clock.

Asked how the Chiefs, who entered the game having lost five of their previous six games, could play with such resiliency, fullback Le’Ron McClain said, “That was a head coach thing. We got that from Romeo.

“What a statement we made. It’s great for him, for his future here. I know a lot of guys hope so. I know he had us ready to play this week and we showed it, from the first drive on out.’’

The Chiefs kept their playoff hopes alive and suddenly they don’t seem so faint. The 6-8 Chiefs will win the AFC West championship if they win their final two games, the Broncos lose next weekend in Buffalo and the Chargers, 6-7 going into Sunday’s game against Baltimore, finish with at least eight losses.

If they somehow find a way to get to the postseason, the players will undoubtedly point to Crennel as the reason. They were already crediting their new coach with showing them the way to beat the Packers.

“There was a lot of pressure on his shoulders,’’ tight end Anthony Becht said. “He’s given this team with three games left and your first game is against the Packers. He was able to keep us together. He kept things positive. He kept things focused.

“It’s a great start. For a head coach to come in, play against an undefeated team that people are talking about being the greatest thing since sliced bread, it says a lot. It’s not luck.’’